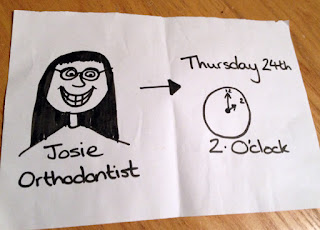 We’ve had two peaceful nights and a successful couple of days in getting my daughter back on an even keel after phantom night-pirates hijacked her and temporarily left a small banshee in her place.

Thankfully, she seems to have been swapped back.

A decision to use more visual aids and prompts in an effort to focus her thoughts and answer her questions seems to be helping.

People with Prader-Willi Syndrome don’t have very a good short term auditory memory. So a long discussion about why she shouldn’t behave in a certain way and what she should do instead is going to lose her attention before any important points have sunk in. To be honest, I haven’t got PWS and I nearly nodded off before the end of that last sentence, so I can kind of sympathise.

The Tooth Count Card, in particular, is going to be well-thumbed. I suspect it may have had more than a little to do with my girl’s recent wayward sleeping patterns. Because yesterday we had an orthodontist appointment, and my daughter was told she will have to have four teeth out and braces fitted. 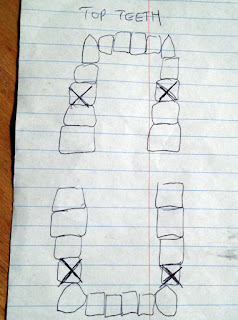 I was pretty pleased with her calm reaction to bad news. Although we already knew this was probably what the orthodontist was going to say, it was still news that my girl didn’t really want to hear. I’d had a chat with the orthodontist beforehand and asked if she could use pictures and visual images to explain everything to my daughter, and she couldn’t have been more patient, or more clear. My girl was miffed, there was no denying it. “I’m not very happy,” she said, looking not very happy. But we kept things simple, kept things calm, and told her that if her teeth were just left to continue growing wonky, then she’d end up only being able to eat soup. Sometimes you just gotta use the food thing. The dentist also provided a picture showing which teeth are going to be taken out. It's there in black and white if Josie asks the question: "Do I have to have any teeth out?" or "How many?", which she will. Many times.

So I’m ringing round tonight, to get all her cousins who have had braces fitted to tell me a) if they had to have any teeth out and b) to count up how many gnashers they’ve got left. This will provide the raw data for an artwork which won't win any prizes but just might save my sanity.

A handclap echoing round a silent house in the early hours of the morning sounds a bit like gunfire.
RAT-A-TAT-TAT!
It’s loud. Really loud.
RAT-A-TAT-TAT!
I crawl out of my bed and trudge into my daughter’s bedroom, my patience twanging in the air like broken guitar strings.
“You HAVE to be quiet, now. You can’t carry on like this. No-one is getting any sleep,” I hiss.
My daughter seems to exist entirely of ruffled hair and huge, wild, staring eyes. The hysterical laughing starts again.
“Enough. This isn’t funny.”
A strange look comes over her face. She doesn’t look right. She doesn’t look like my daughter. I suppose it’s hardly surprising, as this is the fourth night in a row when she hasn’t had any sleep. I’m not exactly sure what she’s running on. She looks like she’s been mainlining Pro-Plus and coffee.
“I’m PISSED OFF,” she shouts. “I’m PISSED OFF.”
I’m taken aback.
But this is just the start.
“I don’t fucking care. I don’t FUCKING care. I don’t FUCKING CARE.”
I try to hide my astonishment. It’s as if my daughter has been replaced with some sort of boggle-eyed swear-bot.
Using a huge amount of effort to keep my voice calm, I tell her: “We don’t use that kind of language in this house.”
For all the notice she takes, she might as well have answered: “I think you’ll find we fucking well do.”
Eventually, she stops. Other noises take over: a yodel, animal sounds, more handclaps, guttural laughs. Peace finally comes at 4.30am. For half an hour. Then the silence is broken by a yelp, and I bundle her downstairs so she can’t wake her brother up.
____

A week later, and the intensity of the night-time ravings and rantings has subsided a little. We’ve had one night’s sleep followed by an up-all-nighter, then two night’s sleeps, and another insomnifest.

School have been aware of what’s been going on: one day in the middle of the maelstrom, she decided to spend the entire school day shouting and making strange noises. Her teacher has been brilliant: she’s come up with a detailed behaviour management plan which we’re linking up to use both at home and at school.

We’re trying to pinpoint what’s triggering this. If we can just get back to more than a couple of night’s catch-up sleep, I think we can break the cycle.

Oh yeah, and just to add more trial to the tribulations, throughout all this, I’ve had an awful cold, cough, sore throat, the shakes, the shivers and the sweats. And all I want is a really good sleep.

Song is The Decemberists - Sleepless. It's kind of beautiful.
Posted by Drakeygirl at 19:47 4 comments:

I’ve been chasing my tail this week.

There haven’t been enough hours in the day. I’ve had a pile of freelance jobs to complete, time-consuming mounds of wet beds to deal with; the rude shock of school/nursery hours to coach my offspring into; the usual child wrangling, cajoling, and patrolling; and the endless loop of re-run conversations and jobs that are needed to keep a relative with dementia on an even keel.

My husband is on the last day of his four day shift today, which means he’ll be around to help for the next four days. These are referred to as his ‘rest’ days, although he tends to let out a bitter, hollow laugh when he explains this to people.

But today has been a good ’un.

I’ve been sprawled on the floor for much of the afternoon, constructing warped shapes out of hundreds of Magnetix pieces, then putting together a wooden train track with my boy that resulted in a record number of disastrous but entertaining rail crashes.

Meanwhile, my daughter, quickly losing interest in our building work, constructed her own entertainment.

She's been upstairs in her bedroom, reading a book and intermittently singing along to songs on the radio. I know this doesn’t sound like anything to write home about, but it is, it really is. She took herself off up there independently, she worked out how to turn the radio on on her CD player (which she’s only listened to discs on before now), she found a station she liked (some God-awful commercial one) and lounged about. Like teenagers do.

Prader-Willi Syndrome can overtake the life of a child and their parents. It can become the be-all and end-all. My daughter has her idiosyncrasies and her struggles. Today, she was mostly just a teenager, chilling out.

Music is Smoove & Turrell - Hard Work, from the Craig Charles Funk & Soul Club compilation CD, which arrived in the post this morning and provided a rousing soundtrack to my day.
Posted by Drakeygirl at 17:49 1 comment: 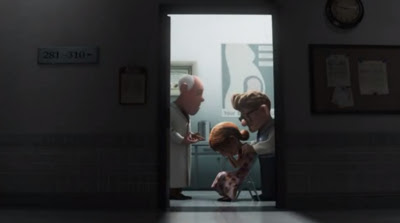