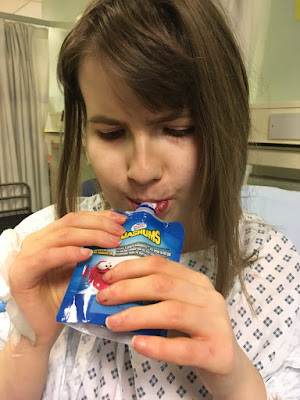 Yesterday was a day where my daughter conformed to a great load of PWS clichés, and defied a whole lot more.

We’d been at the hospital from morning long into the evening, on account of her having an operation to have all four of her wisdom teeth removed.

She was allowed breakfast, but no food after 7.30am.

I’ll just give any Prader-Willi Syndrome parents reading this a couple of moments, as there’s a high liklihood they’ve just fainted with horror...
-
-
...There you go, pick yourself up and sit back down, breathing deeply, you’ll be fine.

To be fair, my girl was remarkably good about the lack of food. She did talk about it pretty much constantly, and checked with me numerous times what soft, liquidy snacks I’d stowed in a packed lunch box to give her when she came round after the op.

We recognised the dental surgeon who spoke to us about the operation he was about to carry out. “Where do I remember you from?” he asked, and then we all twigged that he was the same fellow we’d seen when we were referred to have her teeth out in his dental practice, and who had unwittingly instigated the mother of all meltdowns from my girl when he decided that the procedure instead needed to be carried out at hospital. (I wrote about it here, along with a random sheep and genitals-related anecdote. Don’t ask).

But yesterday, my daughter was pleased to see him, and was keeping a lid on her anxiety. The lid did start rattling alarmingly when the anaesthetist was having trouble finding a vein for the cannula, and mentioned ‘maybe needing to use gas’. One look at her horrified face (you can stick needles in her all day, but a hint of a mask gets her all wibbly wobbly), coupled with me aiming my special Laser Focused Red Alert Warning Raised Eyebrow straight at him, and he reconsidered. The cannula went in on the second attempt, the drugs went in, and she sank into unconsciousness. I told my eyebrow to stand down.

My girl was in recovery for quite some time, as there was a bit of a logjam of patients and not enough beds on the female ward. I’d already read a couple of hundred pages of a book, and chatted with a couple of fellow waiting room attendees, one of whom amazingly turned out to know TWO children with Prader-Willi Syndrome. My girl told me later she’d been a little bit upset in recovery and had wanted her mum, but she hadn’t cried “much”. I wondered about this uncharacteristically touching affection towards me, but understood more fully when she mentioned the man had told her to “listen” and that she “really must stop taking the bandage things out of her mouth”. I could just imagine her stubborn face as she awoke to find two big bits of gauze in her gob, soaking up the blood, and her thinking, “Well, for a start, I’m not having these in...”

But back on the ward she was in surprisingly good spirits. The surgeon appeared and told me the potentially tricky bottom two gnashers had come out far more easily then anticipated. My daughter smiled shyly at him, and he wagged his finger and in a mock strict voice told her: “Just you leave that gauze in a bit longer, Madam!”

She had some nectar from the gods (otherwise known as a yoghurt in a squirty packet thing). I gave her another. She rolled her eyes in an even bigger ecstatic reverie. We waited around for another two hours for the pharmacy to prepare her antiobiotics, and then we were out of there. Home, for a mashed potato and gravy supper. The ‘squishy’ diet for 48 hours has and will continue to provoke much conversation, but she’s getting her food at normal food and snack times, even though it’s ‘different’, so in the grand scheme of things, it’s OK.

She’s been off school today. She doesn’t seem to have any swelling, and has only had a couple of painkillers. I took her for a haircut, then she basically Netflix binged on Call The Midwife.

She discussed it with me, having worked her way through most of Series One.

“Mum, it really, really hurts having a baby, doesn’t it?”

“It certainly does. I take it there are lots of women screaming in Call The Midwife?”

Song is Timmy Thomas - Liquid Mood
Posted by Drakeygirl at 18:55 No comments: 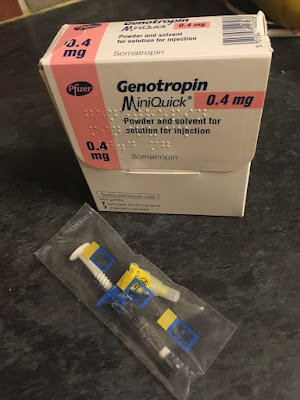