Every nine months, we had to get my daughter plaster-casted. Wrapped up in warm, Plaster-of-Paris-coated bandages, like a miniature Egyptian mummy.
The problem was that when she finally gained the strength to sit up, she was lop-sided. Scoliosis (curvature of the spine) was diagnosed, and like a sagging bridge, she needed some sort of scaffolding. 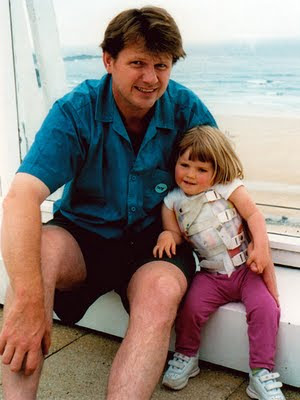 This came in the form of a body brace. A plastic strait-jacket which she had to wear day and night. As she grew, new ones were made to fit the exact contours of her wonky torso using moulds made at regular plaster-casting sessions. We used to return from the hospital with white flecks on our clothes and in our hair, like the oddest painter and decorator team you’d ever seen.

Later, when she learned to stand, she had to get up like a baby giraffe, spreading her legs out wide to get her balance, as there was no ‘give’ in her top half.

We could only hug her properly for half an hour around bathtime when we were allowed to take off the brace. My husband and I would fight for cuddles like drinkers jostling their way to a free bar at a wedding, knowing the money would soon run out.


We used to banish night-time fears of monsters by making up a story of how a big, bad wolf crept into her room and tried to bite her, but slunk away, after hurting his teeth on her cast. Mr Wolf told all his monster friends not to try to eat up the girl with the indestructable superhero armour.


She doesn’t have to wear it now. When she was first free of it, she felt vulnerable. And I wished I’d not told her that bleedin’ wolf story.

The video below is 'Cast - Alright'. I resisted the terrible urge to post something by Phil Collins from No Jacket Required. No, no, there's no need to thank me.