The rain drummed down. Our street was empty. Waterlogged bunting sagged forlornly along the fronts of Nos 1, 9 and 10.


I’d checked with my neighbour Julie that the Jubilee street party was still going ahead, but so far, no-one had braved the rain.

“Right,” I said to my husband, adopting an inspirational voice-over tone. “If we build it they will come.”  Although he insists that what I actually said was: “Get that effing gazebo out there, we’re going to get this party started.” 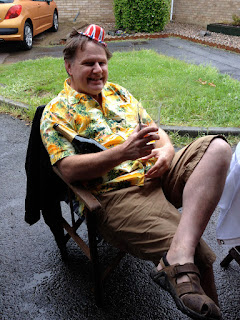 I was dressed as if for a deep sea fishing trip, in a huge waterproof mac. He had decided to don a pair of shorts, sandals, and an Hawaiian shirt. We started to assemble our flimsy shelter. And, sure enough, doors started to open. Fellow residents began to assemble. Other gazebos and picnic tables started to appear. A rain-lashed, windswept, shanty town was erected, much of it weighted down with boxes of beer (which rapidly lost effectiveness with every bottle that was consumed).

Nanna and Grandad, despite not living in our street, were allowed to join in the festivities. In the grand tradition of old-fashioned British values, I kept calling them “bloody foreigners”.

My daughter, who hates the cold and the wet, was wrapped up warm in a chair and supplied with lots of chopped up peppers, salad, low-fat coleslaw, cold chicken, and other healthy grub. There was a vast array of cakes and puddings and all the things she can’t eat because of the strict low-fat diet she has to be on to remain a healthy weight. This is exactly the kind of occasion that used to fill me with dread when she was younger, but we've developed some effective strategies over the years. (The technique on this occasion: sit her next to Nanna, who will remain alert and responsible and make sure her grand-daughter only eats what she’s allowed, while her wayward parents wander around chatting). 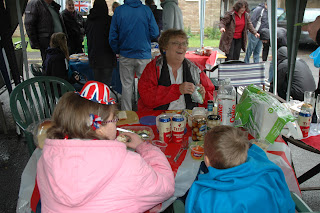 My son, a bundle of grumpiness for the first half hour, wrapped himself in a blanket and played on his sister’s DS. He only poked his head out when he spotted a teetering tower of Jubilee cupcakes. I’m not exactly sure how many he had, but the resulting sugar rush inspired a frantic game of ‘What can I knock over if I stand three feet away and boot my football at the tables?’ The ensuing destruction and mayhem, of course, cheered him right up.

The weather added another unexpected level of enjoyment: when the wind blew, intermittent Total Wipeout-style sudden sloshes of water splashed down from the tops of the gazebo, landing on heads, laps and sandwiches. Very funny, when it was someone else.

We provided the music by looping an extension lead over my back garden wall, and sticking one of our Sonos hi-fi boxes on the table - weatherproofing it by sticking it in a Bag For Life). I’d prepared a Jubilee playlist (you know, stuff like Jubilee Myself and I, Jubileesy Like Sunday Morning). I did throw in God Save The Queen by The Sex Pistols, in the hope of sparking an argument, but the general levels of drunken chumminess were high, and I realised there were probably only about four people there who would really count themselves as Royalists.

By around 6pm, before the first symptoms of hypothermia and trenchfoot were beginning to manifest themselves, we started to disembark from the Jubilee jetty. Empties were collected, my husband and my Dad made a terrible, hilarious, and ultimately fatal, job of disassembling the gazebo, and we said goodbye to the neighbours.

During all of this, the Queen (God Save Her and Her fascist regime) had hardly been mentioned. So what had it all been about?

Well, we were a bunch of people who live in the same road, who don’t always see a lot of eachother because of work, and the way we sometimes tend to cocoon ourselves in our own little spaces.

Someone had had the idea of getting together on a day when lots of other people were doing something similar. It was nice. It was friendly. We spent the afternoon with big grins on our faces, in a soggy little community. And as an added bonus, this meant that we were nowhere near our tellies or radios, so could avoid the TV coverage of the event and its accompanying mass media tidal wave of unctuous lickspittling.

It was an excuse for a party. An excuse to have a few drinks. So we did. By the end of it, in fact, we had invented two new words for being sloshed whilst taking part in a royal celebration. The first: getting bunted. The second: jubileebriated.


Video is Sex Pistols - God Save The Queen
Posted by Drakeygirl at 14:31