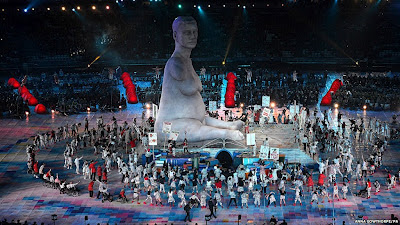 Orbital and the Graeae Theatre Company (made up of actors and musicians with various disabilities) performed a version of Ian Dury’s Spasticus Autisticus at the Paralympic Opening Ceremony last night. It featured excerpts of a Brief History Of Time read by Professor Stephen Hawking's voice (who was there in person and donned a pair of Orbital ‘torch’ glasses).

It was amazing, especially when you think how controversial the song, originally written in 1981 for the International Year Of The Disabled, has been: deemed by many to be “too offensive”* (*translation: too in-your-face, defiant, and uncomfortable).
Also in the stadium was a giant Mark Quinn statue of the disabled artist Alison Lapper.
Earlier, the GB team had tucked their ATOS sponsored lanyards into their tracksuits as a pointed protest at the company which is currently carrying out the Government’s widely-lambasted disability assessments that have caused misery and pain to so many disabled families.
Britain’s first Paralympic gold medal winner, 84-year-old Margaret Maughan, lit the petals of Thomas Heatherwick's stunning Olympic cauldron from her wheelchair.
At its peak, Channel 4's coverage of the ceremony attracted 10.9 million viewers.
My daughter, who has a rare chromosome disorder called Prader-Willi Syndrome, was just too tired to stay up, but the whole shebang is recorded, and today we’re going to watch it together.
Then next week, thanks to us lucking out in the prize draw at her special school sports day, we're going to the Olympic Stadium to watch the athletics.
Tonight's ceremony made me more proud than ever to be the mum of a disabled child. It made me proud to stick two fingers up to any idiot who thinks she’s somehow ‘less’ than anyone else.
As Stephen Hawking said tonight: "There is no such thing as a standard or run-of-the-mill human."
“Hello to you out there in Normal LandYou may not comprehend my tale or understandAs I crawl past your window give me lucky looksYou can read my body but you'll never read my booksI'm spasticus, I'm spasticusI'm spasticus autisticus"

EDIT: Video of the track that stopped me in my tracks (now up on You Tube). If you want to check out the Ian Dury & The Blockheads' original, click on my previous blog post Ripples.