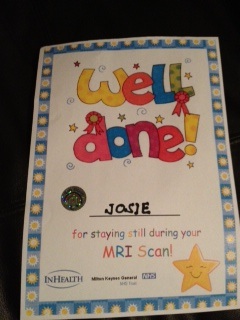 We’ve spent a lot of time in hospitals over the years. My daughter is very comfortable in a waiting room - it’s somewhere she can easily make sense of. There are books and toys to assess, and better still, people to look at and ask me about, loudly. “What’s wrong with them? What have they got?”

Yesterday was a new medical experience for her in a new unit she’d not been to before.
And she found it all quite fascinating.

It was an MRI scan. After her recent bouts of prolonged sleeplessness, her consultant wanted to rule out the possibility of a rare, spontaneous side effect from her growth hormone injections: benign intracranial hypertension.  The prefix benign does make this sound slightly less scary, but the idea of high blood pressure in the brain is quite alarming however you look at it.

I watched the top half of her disappear into the hole of the giant, plastic, doughnut-shaped machine, large headphones clamped on her ears, and a soft toy cuddled up on her chest. Her legs and feet were sticking out, and her socks were all wrinkled up, the coloured heel of one having slipped round to the front of her foot.

I expected I was going to have an anxious time on the outside of the machine, concerned about how she was feeling in there, stuck in that confining tube listening to a disembodied voice telling her to keep still and being bombarded with disconcerting noises.

But any worries quickly dissipated. She was motionless. Compliant, chilled out, and unmoving (apart from an almost imperceptible tapping of her toe in vague time to the clangs and beeps and knocking sounds from the scanner, frankly the laziest raving to extreme techno music I’ve ever seen).

It helped that she’d noticed the boy of around the same age as her who’d had the appointment just before hers. After quizzing the nurses about why he’d had to have a scan (they dodged the ‘breaking patient confidentiality rules’ bullet rather nicely by saying that “lots of people have scans for lots of different reasons”) she asked if he’d been still and did they think she would be “more still” than him. We turned it into a girls are better than boys type competition (always a useful tactic), and she made it her mission to beat him.

She reappeared from the depths of the doughnut, desperate to find out. “Did I win?”
A certificate, a sticker, and a high five from the staff confirmed her position at the top of the MRI charts.

Now we’re waiting on the results and oddly, I feel quite calm about them (as I don’t think the scan is going to show anything out of the ordinary). I’m becoming more convinced, as the pattern of a bunch of sleepless nights followed by a bunch of sleep-filled nights continues, that this is more to do with the potent mix of anxiety, teenage hormones, and that Prader-Willi inability to handle emotions.

I am not a doctor. I could be completely wrong. What I might well be, however, is a bad mother. Because I’m sure, somewhere in the Parenting For Dummies bumper edition, it categorically states that ‘taking your child for an MRI scan does not count as a good day out’. But it kind of did: we had a few giggles, some nice chats, she was heaped with praise and felt proud of herself, and it ended up being something pretty close to fun.

And what have I learned from today? A 14 year-old girl can go without a bra without any problems (the metal in the hooks can interfere with the scan, in case you’re pondering the relevance of this). But for her 41-year-old mother - who lost the battle with gravity some time ago - it’s really not such a good look.