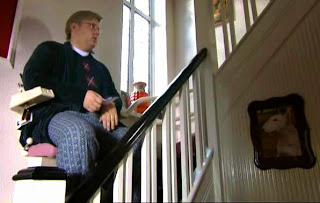 We were supposed to be going to a Bank Holiday fete today to watch a friend sing with her band.

I hadn’t told my daughter - who can’t cope with unexpected changes - that this was an item in today’s agenda. This turned out to be a godsend, because I got a phone call straight from Peter Kay’s Phoenix Nights, and our plans had to change.

It was my mum, marooned upstairs after her stairlift had failed. I had to say it; there was no way I could ignore the opportunity: “It’s OK. Keep calm. What would Thora Hird do?”

Obviously, after laughing for an inappropriate length of time, I offered to help. My dad - who can’t walk without a frame - was downstairs, unable to even make it up the steps to pass up a sandwich (although to be honest he would have no idea how a sandwich was made as he has spent his entire adult life being handed sandwiches by my mum).

I rolled up, like the fifth emergency service. Well, like a shit emergency service, as I could do little apart from find the number for the stairlift company (which promised 24/7 service). I could only get through to a bleedin’ answerphone.

I left a message and sloped off, having to be home to meet my brother-in-law, who was doing a pit-stop to pick up swimming floats, low-fat custards, and healthy snacks for my daughter, to take with him to the villa where we’re holidaying with him in a couple of weeks. (He’s driving, we’re flying, therefore he’s taking all our crap: forward planning and delegation - it’s what we do).

Then I called back at Mum’s, to see if the stair-lift company had responded. They had. They were on their way. We popped back in, to see if everything was OK, turned the On-Off switch to do the obligatory hard reboot, and the lift leapt into life. Mum was rescued, the afternoon was still young, so we decided to recalibrate plans, forget the fete, and join our friend for their birthday celebrations in a pub garden.

We’re back home now, after my daughter’s Prader-Willi internal clock kicked in just before tea-time, alerting her that it was...just before tea- time. So we’ve trotted home, cooked up a healthy sweet ‘n’ sour stir-fry, and have just about recovered from the ‘£7.95-special-offer-on-a-bottle-of-white-wine-so-it-would-be-rude-not-to-have-two’ shenanigans.

I’m sending my husband down the road to take our son to Beavers tonight. Me and my girl are curling up in front of Paddington - The Movie.

It’s been a good bank holiday.

Song is Sixto Rodriguez - Halfway Up The Stairs
Posted by Drakeygirl at 18:01