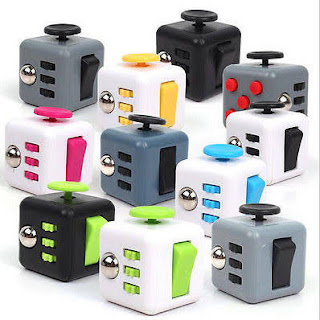 The Fidget Cube craze has infected my daughter.

If you don’t know what one is, it’s pretty much what it says on the packet - a cube you fidget with. Launched last year on the crowd-funding site Kickstarter, it’s a small plastic cube with various clickers, switches and dials, designed for fidgety people - particular those on the autistic spectrum - to self sooth with.

The highly contagious craze (and its literal spin-off Fidget Spinners) soon spread from playground to playground. At some point soon, of course, the little anti-stress toys will go to the great toy fad graveyard in the sky, nestling amongst the dusty piles of Loom Bands, Tamagotchis, Pogs, and - one the for the older readers - Weebles.

These type of crazes are usually faddy, plastic bits of junk, but because people with Prader-Willi Syndrome have a tendency to skin-pick, and/or in my daughter’s case, rub her fingers and wring her hands together, I thought a Fidget Cube might actually prove useful.

Josie has had various ‘fiddlers’ over the years (the longest serving type being whistle strings), but she soon had one of these clicky things on her wishlist.

“This would be a REALLY good fiddler, Mum! Can I have one?”

I ordered it from the internet. And that was when the problems began.

First, the expected delivery date kept changing. I began to suspect it was on a slow container ship from China.

“Why didn’t it come when they said it would?”

Next, when it arrived, Josie began an extensive authenticity drive, spending several hours looking up videos on YouTube, before announcing: “This isn’t a real one. It’s fake.”

I assured her that it was probably just a version made by a different company, and got myself in terrible tangles trying to explain the concept of a generic toy, as opposed to a knock-off one.

“Well, Lewis has got a real one, and it cost £55,” she insisted. I, in turn, resisted the urge to reply: “Well, I don’t think that’s true, because they’re not that expensive, and if it is, then Lewis has been stitched up good and proper.”

After a day or two of wrangling and circular conversations, she was finally able to show me that two of the buttons that were supposed to be silent made a click when you pressed them. This, apparently, was not right.

“So what you’re saying is that I’ve bought you a clicky thing and you want me to buy another clicky thing that is identical in every way apart from two bits that DON’T click.”

That was about the strength of it.

I gave in. Spending a tenner, rather than £55 quid, obviously, I ordered an original cube from nominatively deterministic makers Antsy Labs.

It came. It was the correct one, I assured her. But, apparently, it wasn’t.

“This isn’t a real one because it’s too small.” It wasn’t too small.

“It should be the same size as the fake one.” It was.

“You need to order another one.” I didn’t.

The issue is ongoing. And yes, I do appreciate the irony of all the anxiety caused by an anti-anxiety toy.

This post first appeared in the latest edition of PWS News, the newsletter of the Prader-Willi Syndrome Association UK. They have a very informative website here.
Posted by Drakeygirl at 15:54