The phone rang. It was my daughter’s carer, telling me my girl was in Café Nero, she had dug herself in, heel-first, and wasn’t leaving. It was a full-on, 'horse-at-Becher’s-Brook-in-the-Grand-National' refusal.

We haven’t had one for a while.

Every other Saturday my daughter goes out on a little trip, with a handful of other young people/adults with disabilities. They have a coffee, and go to the cinema or the bowling alley. They are encouraged to use their money to order and pay, and it’s basically good practice in social interaction and independence.

My girl was acing the independence bit and flunking out of the social interaction module, by getting herself tied up in knots over the discussion of what film they were going to see, putting her blinkers on, and basically shutting down to any instructions. Tears and a little bit of temper were involved.

Putting me on the phone didn’t help: she ‘mysteriously’ couldn’t hear me.

In the end it needed a mercy dash in the car to get her home so the other girls could head off to the film my daughter hadn’t liked the sound of.

Later, when my girl left the Zone of Anxiety, I was able to chat to her and tell her how important it was that she does what her carer says.

She fetched her tablet and painstakingly tapped out an email to her carer:

I verry sorry I had a melt down and shouted at you in cafe neo and I am excremliy sorry that I refused to in your car and didn't come as i was told and i realised i was acting like a little girl and not acting like a 19teen year old. mummy explain to me that i have to come as i am told overwise it isnt safe to come out with you and i wont do this kind of behaler agan see hyou inweek on onsaturday and iam worried that you dont wont to take me out eney more but i still wont to come out with you

And yesterday I found this letter of apology to...erm...Café Nero. 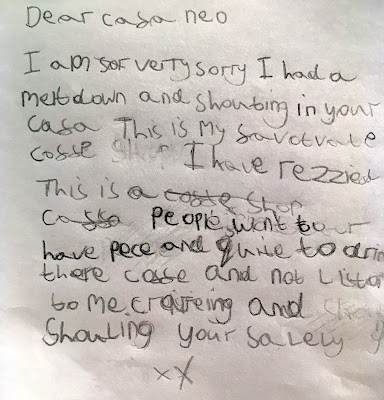 Translation: I am very sorry I had a meltdown and shouting in your cafe. This is my favourite coffee shop. I have realised people want to have peace and quiet to drink their coffee and not listen to me crying and shouting. Yours, sincerely xx

As for my apology?  Nope, still waiting. But, hey, I know my place, and it's way down the chain. Beneath the coffee franchise, obviously.

Song is Nirvana - All Apologies
Posted by Drakeygirl at 16:33