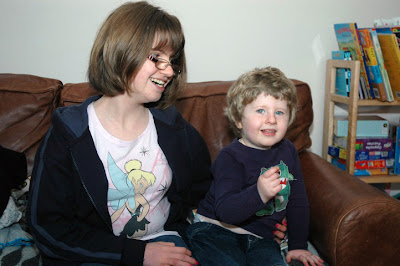 
I go on Twitter to let off some steam, chat about music, crack a few jokes and enjoy the warmth, humour, silliness and intelligence of a bunch of people I’ve chosen to follow.


I don’t tend to mention Prader-Willi Syndrome much on there, as it’s enjoyable to have a separate space where I can be a grown-up but leave behind some of my grown-up responsibilities.


But I do tweet links to new entries on this blog, which people can click on to read if they’re interested, or move their mouse on past if they’re not.


And this is how something quite brilliant happened yesterday.


A Twitter friend read A Drake’s Progress. And realised, very quickly, that he had a real life link to my link. A close friend of his, also on Twitter, happened to have a toddler with the same rare chromosome disorder as my 13-year-old daughter.


So, with a little bit of planning, we made a small detour when visiting family up north this weekend, and popped in for a cuppa and a chat so our children could meet.


Hugs were involved. As were questions.
My girl, who is completely fascinated on the rare occasions she meets someone with the same condition as her, began The Spanish Inquisition: “Did he have trouble feeding like me? Did he cry when he was a baby? Will he like the special snack Mummy has bought for him?”.


The little boy's parents answered all the questions happily. (A good job, really, because my daughter probably would have refused to leave until they had). And for their part, they had the chance to meet a 13-year-old girl with the same unusual DNA as their tot, and ask her (and me and her dad) questions about some of the things she did.


It was great to meet someone without having to explain your child’s medical condition, for once. It was great to speak to someone who just knows some of the feelings you’ve gone through, you’re going through, and you’re facing in the future.


And it was great to share experiences and chat about our kids, who are so different from other people’s children, and then again, really aren’t.


So, the next time someone moans about the inanities of Twitter, give ’em a slap. Tell them sometimes it weaves a little magic.


Video is The Beloved - Hello
Posted by Drakeygirl at 08:08