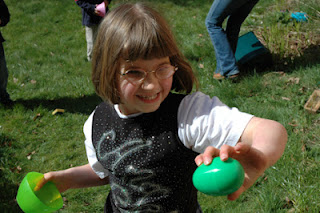 Children with Prader-Willi Syndrome miss out at Easter, don't they?

You can't easily escape chocolate eggs at this time of year, but when you have a child with PWS, whose food intake has to be strictly controlled in order for them to remain healthy, you have to.

A friend of mine had a big Easter party for all our kids one year, complete with an egg hunt. The children were given bowls and let loose in the garden, to hunt down foil-wrapped calorie bombs hidden in the bushes, under patio chairs, up trees and in flowerpots. 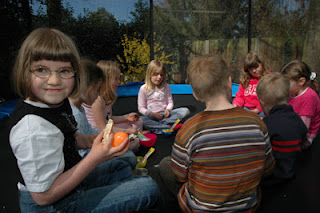 I knew my daughter would love this; the hunting bit would be fun. But then, there'd be some eating. And I worried about how she'd feel when the others chowed down on choccy, which she wasn't allowed. She always seemed happy enough with her alternatives when we were at Nanna & Grandad's with her cousins - they'd have their milk chocolate fix, and she'd have some raisins and a Snack A Jack and all would be well. But this would be different. There were going to be a lot of kids getting their chocs off. Would she feel left out?

I came up with a plan. I do this a lot. I saw some sweets for sale in a shop, that came in a hollow plastic egg. So I bought them, selflessly ate the sweets, and kept the egg. This was to be my girl's special Easter Egg. It was duly loaded with no-sugar sweets, breadsticks and other goodies that she was allowed to eat. And when the time came to stash the booty for the Great Egg Hunt, her green, plastic, non chocolate-containing egg was stashed in a flower bed. Mums and dads dutifully whispered in their offspring's ears: "If you find a big green egg PUT IT BACK," and the hunt began.

I told my girl that she had to look for one particular egg, and described it. Off she went, wandering about in amongst the over-exicted rabble of pumped-up sprogs. She picked up a few foil-wrapped Cadbury's eggs and brought them to me in her bowl. "I found these Mum. Can you give them to Hamish?" 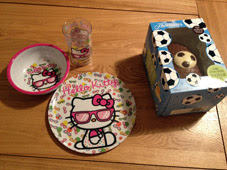 As my girl has grown older, she's got cannier. She's worked out she'll get her normal allocation of meals and snacks at Easter. What she's now learned is that people feel a bit sorry for her not being able to have a chocolate egg. So they buy her something nice instead. A craft set, felt tips, a CD. "They're WAY better than an egg, Mum, aren't they?" she gleefully told me one year.

So this morning, my three-year-old boy was given a Thornton's Football Egg. And my daughter got a Hello Kitty plate, bowl and cup set. Later, she's getting The Princess Bride book, from Nanna & Grandad. Missing out, my arse.


Video is Dylan Hears A Who - Green Eggs & Ham (Thanks to @DaveDogFacedBoy for this)
Posted by Drakeygirl at 09:59