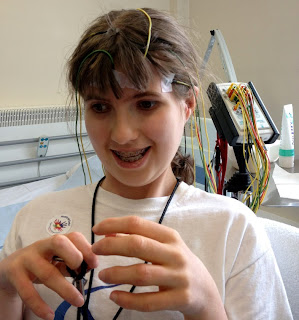 The EEG was a breeze. More so than trying to spell it out in full: electroencephanlography. (Just imagine if your job was 'electroencephanolographist' and you lived in Llanfairpwllgwyn-gyllgogerychwyrndrobwyll-llantysiliogogogoch. Blimey.)

I’ll stick with the abbreviation: an EEG is a test that records the brain’s electrical activity over a short period of time by sticking multiple electrodes on the scalp.

My daughter had to have one yesterday, as part of ongoing checks to look at the remote possibility that her bouts of sleeplessness are being caused by small seizures. At this stage, and with the recent diagnosis of a mood disorder being the cause of her uppity ups and downity downs, seizures seem to be unlikely. But it’s good to check.

The nurse was chatty, friendly, and patient with my sleepy girl (who we’d deliberately kept up all hours of the night, having been instructed to do so in the appointment letter).

She got out a tape measure and marked a series of spots all over my daughters’ head, and with the aid of some sticky goo attached a load of multicoloured wires to her bonce.
It didn’t look quite as space age as I was expecting, in fact, if anything, my girl looked as if she’d had some ill-advised coloured hair extensions put in. All she needed was some henna tattoos and a pierced belly button and she’d have the full gap year student look.

The blinds were pulled, the lights turned off, and then we sat there in silence as she lay on a bed, her head plugged in, and a smile on her face as she was given permission to ‘rest her eyes’.

Her hands rested on her tummy, fiddling with the string of her whistle, which has recently made a reappearance in her life, as a distraction tool to stop her rubbing and picking her fingers. (Talking of fingers, good lord, that photo makes my daughter look as if she has GIANT hands!).  But after a few minutes, she was still. Sleep washed over her. It didn’t do the same to me, honestly, as I sat there watching, in the quiet, with the humming of the fan, and the peace, and the silence, and the slow, hypnotic, ticking of the clock. Not for a minute, no way, no how, did I fall asleep too. Nope.

It didn’t last long. After 20-30 minutes, the nurse told us that the test was finished. I asked her how it had gone. “Well, we got some good readings: your daughter actually went into REM sleep, which is the kind where you dream. You normally don’t go into it so quickly, but keeping her awake last night meant she went into quite a deep sleep.”

The doctors will be in touch with the results, and also to tell us if they require further tests, possibly timed to coincide with one of my daughter’s self-induced insomniweeks.

Tonight, she had an early night. Something I wish her brother would have considered.
“What does your brain look like, Mummy?” my boy asked me as I tried to tuck the wriggly bugger into bed.
“Er, quite big and wrinkly."
“Oh. Jo-Jo had a test, didn’t she? I need a test too, you know. In the hospital, too. On my brain. With wires, or we could suck it out with a straw or something, because I DO NOT want to go to sleep. Sleep is boring.”
“Well, have a lovely, boring night then, little man, because it’s your bedtime.”
“Yeah. Have we got any straws?”

Video is Green Day - Brain Stew
Posted by Drakeygirl at 21:28