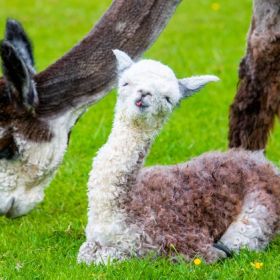 People are really struggling as they stare into the abyss of the coronavirus pandemic.

They’re worried and frightened about themselves or their loved ones dying, and they’re having to deal with these fears whilst coping with lockdown restrictions.

My daughter has Prader-Willi Syndrome, which means she hates change, gets incredibly obsessional and anxious, and can become completely overwhelmed by her emotions.

So we’ve had some meltdowns.

Not, as you’d imagine, centered around worries about her own health or the health of her family. Oh no. That would be too logical for a girl whose anxieties put the tangent in tangential.

Her biggest recent emotional blow-out was about alpacas.

She sat in the living room, the panic in her voice rising as she called out, frantically: “Mum! Peter faces a struggle to save a baby alpaca that was born in a storm, but Julian is helping deliver an alpaca in a breech position and they’re NOT THE SAME, MUM!” This very specific worry was repeated, three times, each time with more urgency.

I had questions, of course. Who is Peter, who is Julian, and was there a lockdown in the alpaca community nine months ago*, or is there another reason for what seems to be an alpaca baby boom?” (*having later consulted Google, I underestimated the gestation period by 3 months).

The kerfuffle around camelids* (*I googled the hell out of alpacas, what of it? Did you know they hum, snort, grumble, cluck, and scream? Well now, you do). Where was I? Oh, yes, the kerfuffle around camelids was actually to do with a telly-related mistake. The 30 word listing in my daughter’s well-thumbed TV choice magazine (which she uses to obsessively check the blurb for every episode of her favourite shows, in advance, during and after watching them), didn’t match the listing on the telly’s Virgin Media guide for the latest edition of The Yorkshire Vet. She wanted the new episode with Peter doing gynaecological things with a jumper-donating South American mammal in adverse weather conditions, NOT the one with Julian dealing with a breech birth, because that was a repeat.

“It should be series 10, Mum. PETER FACES A STRUGGLE TO SAVE A BABY ALPACA...”

I tried to cut her off, but her mental blinkers were locked and loaded, and we had to hear the same conflicted, specific, sentence about differing vets and differing births for the fourth, fifth and sixth times before I seized upon a longer pause for breath, and dived in with a solution.

“Look, don’t worry, it’s obviously a mistake. Either the magazine or the telly have put in the wrong description. All we need to do is record it, and then when you watch it back, you’ll find out if it’s the new one you want to watch. If it’s the old one, you can delete it.”

I smiled at her. She looked at me, nodded calmly, and said; ‘MUM! IT SAYS PETER FACES A STRUGGLE TO SAVE...”  et cetera, et cetera.

I don’t know about Peter, but I faced a bleedin’ struggle. For the following four hours. She really didn’t want Julian to be butting in with the breech. We had tears, exhaustion, repetition, and teary, exhausted, repetitive, reading-out-louds of the listings. She couldn’t forget about it, be distracted, or focus on anything else. And when the programme finally aired, we watched with bated breath and breathed a sigh of relief. A storm was on the way and Peter was the man.

“I can go to bed now,” she announced, perfectly happy and content, switching off the TV, after seeing just the first minute, and checking the red recording light was on.


Song is Sam The Sham & The Pharaohs - Wooly Bully

We've been helped hugely over the years by the PWSA UK (Prader-Willi Syndrome UK) - an amazing charity which does tremendous work supporting people with PWS, their families, and professionals who work with them. Like many charities, the coronavirus lockdown is placing them under unprecendented financial strain - with fundraising events cancelled because of social distancing rules and with no government bailouts for charities, they are facing the very real threat of closure if they don't receive donations. Lots of people are struggling to make ends meet at gthe moment, but if you have anything to spare, even just the price of a coffee, please click on the Donate Now button on the right hand side of their home page, which can be found here .
Posted by Drakeygirl at 22:42