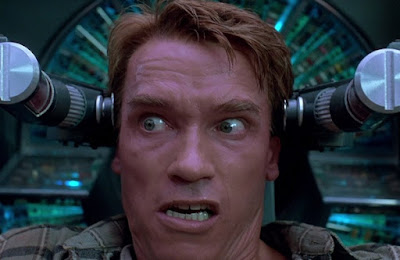 The one about a secret agent who has his memories altered. I mean the original one - you know, the 90s one with Arnold Schwarzenegger flexing his muscles and looking pained as he strained to remember things. Genius piece of casting, that, because Arnie always looks pained as he strains to remember things, in every part he ever plays. And in real life.
(Incidentally, on mentioning this to my husband, he displayed a very specific total recall of Total Recall, going a bit dreamy and murmuring: “Ah yes, there was a woman in that with three boobs. Three!”).

The film popped into my mind because I’ve been thinking about how my own memories have been altered.

Let me explain: when your child is diagnosed with Prader-Willi Syndrome, your world is turned upside down. I know I felt devastated, terrified, sad, confused, and angry. I know that, but I’ll never properly feel how I felt then, because my memories have been changed by future events. I’m not sitting in a darkened room, weeping beside a bed-ridden girl who can’t walk or talk, which was - in my post diagnostic madness - kind of what I envisaged life might be like. What I’m doing instead is telling my 16-year-old daughter to stop quizzing her brother about whether or not he likes spaghetti bolognaise, and laughing at her incomprehension at the idea he doesn’t find the subject quite as fascinating as she does.

I can see my memories of those bleak first few weeks, but they’ve been drained of their power. I’ll never forget them, but they’re so much easier to look at, now they’ve got no juice left.

Six years ago, I imprinted some monster memories in my bonce when my daughter had two spinal fusion operations to correct scoliosis, and we suffered the agonising wait to find out if everything had gone smoothly and none of the nightmarish possible complications had occurred. I’ll never forget those memories. But they don’t have the clout, the oomph, the welly they had when they were being made, because everything turned out OK in the end. They’ve been un-clouted, de-oomphed, and welly-wanged.

Last year, there was another memory set (there always is). I thought a series of wild, sleepless nights would be carved into my brain forever as my girl was caught in the throes of a then undiagnosed mood disorder, causing her personality and behaviour to change dramatically. For a short, hysterical time, my sweet daughter did previously unimaginable things like turning tables over at school, trashing her bedroom, and swearing. Swearing, from the girl who, if she stumbles across a non-radio friendly version of a Jessie J song on YouTube, tuts: “Jessie, I’m surprised at you!”.

But getting the right professional help, and the right medication, miraculously turned the problem around, brought our girl back, and in turn has made those memories less visceral.

I suppose what I’m trying to share is this: if you’re stuck in a place where you feel like you are just churning out a slew of bad memories, don’t panic.


Remembering a time you’ve been punched in the chest doesn’t hurt so much in retrospect, once you also remember how you got your breath back.

This post first appeared in the latest edition of PWS News, the newsletter of the Prader-Willi Syndrome Association UK. They have a very informative website here.
Posted by Drakeygirl at 20:44 No comments:

Bless me Father, for I have sinned. It’s been a month since my last confession. I say confession, but I mean blog post. By the way, I’m not a Catholic, I’m an atheist. Although I am a multi-faith non-believer when it comes to booking my kids into cheap summer holiday playschemes run by local churches (Baptist and Anglican so far, if you’re interested).

There are reasons for my blogging purdah. The core of them are not about my daughter and her challenges. I could tell you about them. About old age mugging my loved ones, about the doctors, and pharmacies, and the medication that didn't work, about trips to A & E, and hospital parking, and my Mum-in-law nearly dying from dehydration on one ward, and her asking for her husband who’s been dead for 23 years, about my Mum four floors above her in the same hospital with one condition, being released and coming back in agony as an emergency with another, about how she doesn't deserve it, how they both don't deserve it, and about me and my husband doing the whole hospital tag team thing like some rubbish version of Big Daddy and Giant Haystacks. All whilst fitting in work. With the children on school holidays. I could tell you all that, and I just did. If you think I’m after a medal, you’re goddam right. A big shiny one, with chocolate inside the gold foil, if you’re asking.

But we’re getting through it. My girl, with her syndrome that sometimes has her tying herself up in knots of anxiety, has had to deal with a lot of uncertainty, changes to routine, and dreaded grey areas. She’s taken it all in, she’s worried and wobbled, but she’s coped.

There’ve even been glorious moments amongst the grim. Life may sling some shit at you, but it'll still bung you some laughs. I like to think of them as 'chuckle wet wipes':

There was the day I discovered my Dad (aged 80, recovering from a hip operation) managing unexpectedly well at home for three weeks on his own without Mum (thanks to some quick lessons in microwaving ready meals). In fact, at one point I suspected he was auditioning for a new sitcom called Old Men Behaving Badly when I discovered him sitting in the garden in the sun, topless, drinking Spitfire Ale straight from the bottle. If Mum had been there to see that, there would have been a whole new Battle Of Britain. She's back now, she's probably reading this, and er... sorry Dad.

And then there was the time I was driving back from hospital having taken my daughter to see her Grandma, feeling drained and teary and worried that my girl would be worried, and we put Taylor Swift on the car stereo, and we belted out every word and shook out every shake, shake, shake, and grinned and laughed and breathed and shook it all off, ah ah, shook it off, ah ah.

And on Saturday, for the first time for a while, we went away for the night. It was no romantic City Break - in fact, technically, it was my friend’s kid’s 8th birthday party. My daughter had been transported to her Prader-Willi Syndrome Best Friend Forever’s house for a sleepover. My boy was Zebedee-ing on a bouncy castle for hours, generating a large blister but not caring. And I was with my man and a bunch of good mates, kicking back, letting the kids run wild, laughing 'til it hurt, and feeling relaxed. To be honest, it wasn't long before I was relaxed as a newt.

We’ve got a packed agenda today. Mum-in-law has proved herself a ridiculously tough old bird and rallied after the latest crisis, but doctors’ advice about her dementia and ongoing pain and reduced mobility has finally forced us to face up, man up - no, sod it - woman up, and find a place for her in a care home.

Brother-in-law is down from oop north and has worked tirelessly: wading through Care Quality Commission reports; phoning; visiting; questioning. And he’s secured her a place. An ‘a hell of a lot better than I ever thought’ place at a really nice home, right here in our town; right here, so I can take her to her usual hairdresser every Wednesday; right here so I can drive her to her Thursday Memory Group; right here, so her friends can visit easily; right here, right now. When we went to look round, we all said we were not just OK with it, we were properly happy. I feel she will be safe and genuinely, properly cared for. And I’ve not felt like that with her in her own home for a while, and I didn’t realise what a crushing worry that really was. My daughter came with us to look at the home, the room, the garden, and the koi carp in the pond, and she announced: “I think Grandma will like it.” For some reason, in a peculiarly posh and sage-like manner, she then added: “I don’t she any reason why she shouldn’t.” (By the way, I’ve no idea why my girl has started talking like a dowager duchess. Another particularly proper announcement today was: “It’s 21 degrees, which is simply lovely English weather, don’t you think?”)

We’re gathering Mum-in-law’s photos, treasured possessions, and familiar bits of furniture, to transfer to her new room. And, of course, to pay for what she needs now, we’re kickstarting the whole selling of her house saga.

Phil, the manager, is going to see her in hospital. He said that from our description of her he was sure he’ll be happy to accept her into his care “unless she starts screaming obscenities and coming at me with a knife”. He had a twinkle in his eye. Unless hitherto unseen Ninja Nan tendencies suddenly manifest themselves, I think they’re going to get on. Despite everything, Mum-in-law still has a twinkle or two of her own.

It’s been intense. It isn’t over, by any means. But I feel like I’ve resurfaced.


Video is Taylor Swift - Shake It Off

Posted by Drakeygirl at 07:26 No comments: