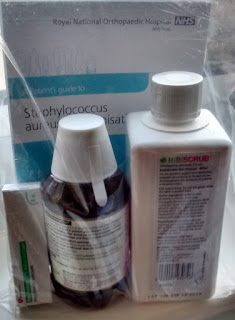 We headed back from the hospital.

In the boot was a bag of scrubs and ointments that have to be administered to various parts of my daughter’s body in the five days leading up to her upcoming operation. The lotions and potions are to rub on her hair and skin, stick up her nose, and swill down her throat, all to minimise the risk of her developing an infection after her back surgery. They came with an explanatory booklet with the catchy title: 'A Patients’ Guide To Staphyloccuus Aureus Decolonisation', which sounds like something Douglas Adams and Philip K Dick would have come up with if they’d written a novel together.

My girl’s pre-op assessment was complete. She’d been weighed, measured, had her bloodpressure done, had nasal and groin swabs taken (yuk!) and is now, officially, paperworked up to the eyeballs.

The ever elusive date is still to materialise, but the vague timetable has shifted from 'May/early June' to 'possibly April'.

My daughter panicked when the nurse said this. “April? It won’t be on the 13th, will it, Mum? Because we’ve got travel training at school that day.” (Travel training is where her teaching assistant takes her out to improve her road sense, trying to teach her how to safely cross roads, and how to catch a bus etc.).

Later, much later, when we were home, and the circular conversation had run its course, my girl headed for our TIVO box, and searched out her treasured saved programme folder of Topsy and Tim episodes.

“I’m watching the one where Topsy has her appendix out,” she told me, solemnly. “It’s like practice for me about being in hospital.”

She’s practised about a dozen times so far. Topsy and Tim are intensely irritating little shits, aren't they? Still, it could be worse. It could be Patch Adams.

We have the go-ahead. My daughter will have an operation to remove her spinal metal work.

It’s more than three months since her op was cancelled with just three days notice. It’s more than 10 weeks since she had a scan which would prove whether she definitely needed the procedure or not - but which no-one would tell us the outcome of. It’s been long enough for my girl to rack up astronomical repeat numbers for the question: “Will I have the operation?” It’s way past breaking point for me, after scores of phone calls trying to get someone, anyone, at the hospital to tell me what was happening.

Do you know what finally worked? There was a moment, when I was leaving yet another message on another answering machine, where I was recounting the sequence of events yet again, when I got to my teeter point. (Not the moment when I go all wobbly after to much wine, that’s different). No, this particular teeter point is when I’m having a difficult conversation (in this case to a machine, but hey, it was still intense), and when I feel myself getting a bit emotional. What I normally do is take a deep breath, make a decision to rein in the inner tumult and pull myself together. But not this time. This time, a little voice in my head whispered: “Fuck it. Let it go.” You know, like some sort of X-rated version of Frozen.

It will be May, or early June. My girl is having a pre-op appointment this Thursday, which I snapped up before even hearing the time and working out the logistics of sibling school runs and early morning traffic and other extraneous bollocks. Nope, I was taking up the first appointment they offered, because that would mean she’d be ready to roll when a date comes up.

We have the go-ahead. Finally. We don't have an actual date, but we have a ballpark and the ball is in it.

Oh, and I have something else. It's a recommendation to any parent lost in the labyrinth of NHS admin: Whatever you do, check, double check, triple check, pester, pester some more, pester again, keep on pestering, and sometimes, just sometimes, when you’re teetering, don’t step back from the edge - jump right off.