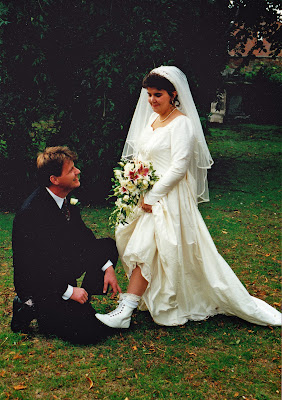 This might be a bit dull for you, so I’ll make it quick.

No, I’m not quoting what my husband says to me in bed, the charmer.

It’s our wedding anniversary today. 18 years ago he took me up the aisle (I’m sorry, this seems to be turning into a Carry On homage).

Strangely, I wasn’t nervous. This was despite the fact that everyone was looking at me and I was wearing a big white frock (although my calm, steady demeanour was greatly aided by the anchoring effect of a pair of 16 hole white DM boots).

I just knew, that’s all. I’d known for a long time: we’d been together for six years already. I was 24 and I was sure. This big, tall, handsome fella, who looked like Nick Faldo when he scrubbed up and Paul Merton when he got up, was who I wanted, who I needed, who I loved.

He was everything. He still is.

Er ... just to be clear, I'm referring to my husband, not Nick Faldo. Or Paul Merton. That’d be a bit weird.

And when I say everything, I mean there is other 'stuff' that I couldn't live without, like our two kids, and our record player.

Video is the Have I Got News For You credits from 1995, the year we got married. 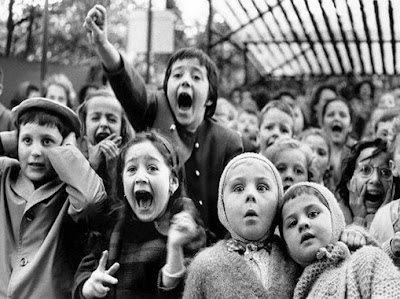 I’ve got a pretty good poker face. Not that I ever play poker, but you know what I mean. Parents of disabled children tend to learn how to quickly switch on a deadpan expression, to mask any potentially anxiety-inducing looks of shock, hurt, or fear. We also have to stifle a lot of laughter when our children are deadly serious about unintentially funny topics. (Please note an unintentionally funny topic is not a chocolate bar shaped like a penis).

I can keep a straight, expressionless fizzog when I need to. It’s useful when my daughter gets anxious about unexpected changes; when a doctor tells me something alarming but I don’t want to let my girl know I’m alarmed; and when she regularly bowls me a googly by asking random questions like: “Are baby hippopotamuses more dangerous than wasps?” and “Are you sure Hitler isn’t in the school toilet?”.

Someone tweeted this fantastic photo the other day. Yep. That’s what sometimes goes on behind my mask.

Posted by Drakeygirl at 19:31 No comments: 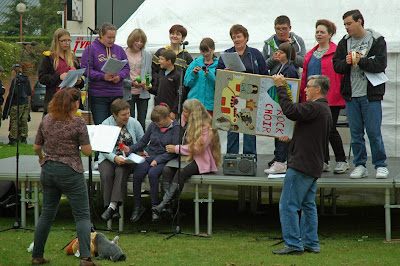 Yesterday, we raised the goblet of rock as we watched a gang of kids with special needs sing haphazard, glorious versions of Abba’s Mamma Mia, Ho Hey, by The Lumineers, and that well-known rock classic, We’re Going To The Zoo.

I’d had the phone call earlier in the week. Would my girl like to practice a few songs at After-School Club so she could climb aboard the tour bus with the school’s rock choir and perform at the church fete on Saturday? The answer, of course, was “For those about to rock, I salute you, yes please.”

It was their first time ‘on the road’. They had to produce something special to win over the gig crowd - after all, they were on after a troop of small, cute children doing a cheerleading routine to the Thunderbirds theme.

It took them a while to clamber on to the raised outside stage, which had a high step some of them couldn’t manage on their own. There was a slight delay while the church blokes running the PA had to dash inside and find a tape deck, when it turned out the music was on a cassette and not a CD. A girl in a wheelchair was lifted onto the front of the stage, and sat, flanked by two members of staff, supporting her as she joined in with real gusto. My daughter stood, wrapped up warm in her bright blue winter coat, shyly shaking some maracas.

They were a bit timid at first. Their animal impressions during the zoo song were slightly half-hearted, and a lack of a working monitor caused a few difficulties when it came to Abba, approached at an ambitious speed.  They couldn’t hear the music too well, so it turned into a round as they got a couple of verses ahead of the backing track, but eventually got far enough in front for the chorus to catch up with them. By this point, they were giving it their all, blissfully unaware of their unorthodox relationship with the tempo. Superblummintroupers, the lot of ‘em.

And then it was time for their crowning moment, as they launched into The Lumineers.  The “HO!”s and  HEY!”s rang out, not necessarily in the right order, even though the teacher was holding up signs to help, but it didn’t matter. The kids, the staff, and the crowd were all grinning. I clapped along, looking at my daughter’s shining face; the line “I belong to you, you belong to me, my sweetheart,” just about sums it all up.


We left as it started to drizzle, carrying the treasure from our pre-gig booty collection mission at the fete’s fundrasing stalls. We passed an enthusiastic Zumba class, whooping it up with a full-on performance of Gangnam Style. A gaggle of giggling Air Cadets had joined in at the back. My daughter stopped for a minute to watch, dreamily hugging a bagful of second-hand books to her chest. And my boy just couldn’t stop beaming, clutching his ‘Test Your Strength’ stall prize -  a slightly lethal-looking plastic bow and arrow.

It was a bullseye kind of day.

Video is The Lumineers - Ho Hey

Posted by Drakeygirl at 10:39 No comments: 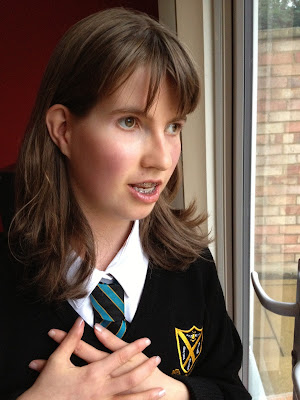 It’s been a good start.

We will get some wobbles, because wobbles have a way of building up and spilling out in a wobbly way (a bit like my waistline does when trying to fit into my jeans again now the summer sun has clocked off).

But my daughter is chirpy and chatty after her first week back at school.

Her hair was styled; nail varnish painted onto her finger- and toenails; and eyeshadow, lippy, and blusher applied, highlighting the hitherto-undiscovered landscape of her perfect cheekbones.

In a shocking piece of gender sterotyping, the boys, apparently, did Gardening.

You may notice that in the photo my girl has her hands resting on her chest, splaying her fingers out artfully. You might imagine this is because I posed her like this to show off her nail varnish, but this is not the case. She was so proud of her grown-up nails that she held her hands up to display them prominently - all the way home from school, all evening and even as she got into bed.  “You can relax your hands, sweetheart,” I told her, “You’ll give yourself cramp if you’re not careful.”

She didn’t take much notice. Not having any nail varnish remover in the house (due to my disctinct lack of long nails thanks to a lifelong nail-biting habit), she had to go to school today with her digits still decked out with candy pink tips. And as we walked through the gates, she continued to hold them out in front of her, looking like a puffed up pianist preparing to astonish and delight a concert crowd.

I’ll be shouting "Encore!" the loudest, as usual.

My daughter used to go to Guides, and loved it: the songs and promises, the rituals and rules, the church parades and camps, and the whole Hitler Youthy uniform thing.

After we moved house, she couldn’t go to her old group where many of the girls had known her since nursery and primary school. She joined the troop in our new town, but
was a bit shy, complained of being tired by the time it finished, and made a decision not to go any more.

We’ve been trying to think of an earlier activity that could replace it, and give her a bit of social interaction and stimulation out of school hours. And, by George, I think we’ve got it!

Today, she started After School Club. It’s two hours on a Monday, where the minibus picks her up from her satellite class at mainstream school and trundles her up to the special school secondary site.

Her younger friend Bethany was there (I’d checked her days with her mum and deliberately synchronised my girl’s attendance).

They had a great time. Most of it, I gather, spent cutting out and sticking every item from the four pages of Hello Kitty branded goods in the Argos catalogue, which they have decided they are going to present as a shopping list to the headteacher, entitled: ‘Toys we need for After School Club.’ Good luck with that, girls.

How do I know it was a proper success, though?

My daughter, the one with Prader-Willi Syndrome, the one who never physically feels full up and who has her tea at 5pm on the dot, announced pointedly to me when I picked her up at 5.30pm: “I really don’t mind having a late tea, mum.”

Fulsome praise, I can assure you, doesn't come any fulsomer.

Song is Ray Charles - At The Club 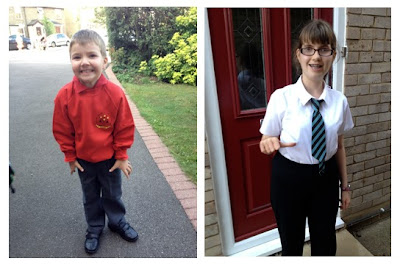 The years are flashing past faster than a minibus full of mooning rugby players.

Five years ago I wandered into the hospital at half past midnight, popped out a baby boy, and was home introducing my daughter to her new brother at breakfast time. What with it being breakfast time and her having Prader-Willi Syndrome, she finished her cereal before she gave him a cuddle, of course.

She was anxious, but manageably so, considering she faced a new classroom, new teacher, new teaching assistants, and some new classmates.

He, despite the misleadingly cheerful photo, was worried and clingy, and treated me to a fountain of tears outside the classroom door. The teacher bundled him inside, and I breathed a sigh of relief, only to be surprised by the forlorn fella making a bolt for freedom back out again. Dropping the soil out of the bottom of his trousers was his big mistake. That, or speaking English to a passing Nazi.

It's the end of the day, and the thumbs ratings data is in. The sprogs had to give a thumbs up, thumbs down, or thumbs sideways (representing ‘not sure yet’).

My boy gave his first day a wavering sideways thumb. To my surprise, after this morning’s heart-wrenching histrionics, his second day got a thumbs up. “I told my friends I was sad, and they played with me all day,” he said, chatty and chirpy after school, his smiles fuelling my relief.

My girl gave today a ‘not sure’.

“I don’t like my new classroom. I liked my old classroom much better.”
“But was it OK with the new teacher and teaching assistants and your new friends?”
“Yeah, that was thumbs up.”

Song is Ike And Tina Turner - Crazy 'Bout You Baby, from Bold Soul Sister: Best Of The Blue Thumb Recordings
Posted by Drakeygirl at 18:57 No comments: