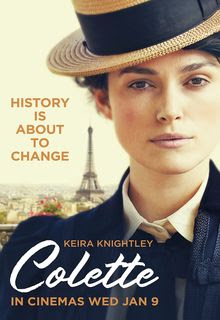 My daughter’s cinematic tastes are complicated, sometimes rigidly rule-based, and at other times capricious.

Despite loving all the Pixar films when she was younger, she now flatly refuses to watch any Disney animated feature, although live action Disney is acceptable. And, as you can imagine, the live action/animation mix of Mary Poppins Returns was VERY DIFFICULT TO DECIDE ABOUT.

Every other Saturday, my girl goes out with a small group of other young people/adults with disabilities, usually for a coffee and a cinema visit. She doesn’t always get to choose the film, which can cause problems, and this Saturday she came home a little disappointed after sitting through Aquaman. (Apparently, according the reviews, it’s a bit of a day-glow mess of a movie. Although it has got the 6ft4in tall redeeming feature of chunky man beast Jason Momoa in it, so it can’t be all bad).

“Mum, I didn’t want to see it. I really want to see Colette. I saw a trailer and it looked good.”

I vaguely recalled reading reviews of the film - an historical biopic of its titular French writer and performer. Words like ‘gender fluid’ and ‘kinky’ had come up.

I checked it out on the BBFC website, and decided my daughter could handle a few scenes of nudity and sex, so I agreed to take her to the cinema to see it today after college.

I gave her a pre-screening warning of: “It’s got some rude bits in it.”

Two hours later she had proved that she could cope. She asked no questions throughout the screening, despite the intricacies of a plot - most of which must have sailed over her head - including elements such as: ghost-writing; the selling off of publication rights; intellectual awakenings; gender politics; and a selection of marital, extra-marital, lesbian, and mildly fetishistic, sex scenes.

“I really like that. It was brilliant,” she said, beaming.

There was one thing, you see, that I haven’t mentioned. Keira Knightley (Colette), had a secret weapon to ensure my daughter’s undying attention. It only appeared in a couple of scenes, but it was enough to make my girl shake with excitement and remain rapt throughout.

She had a pug.

Related posts: Pug
Posted by Drakeygirl at 21:57 No comments: