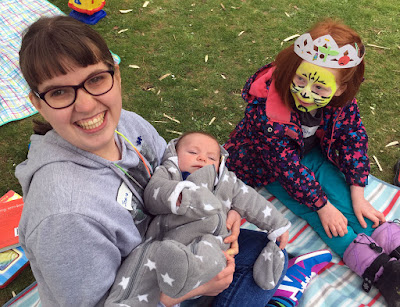 Today was one of those community days.

I don’t mean I had to don an orange jumpsuit and paint over graffiti - that’s every other Sunday, and I still insist I was provoked, officer.

No, it was one of those days spent with other members of the PWS community. This PWSA UK (Prader-Willi Syndrome Association UK) family day was at Thetford Forest, and proved as much of a grin-generator as previous events we’ve attended. And, as you may know, we’ve attended a lot. Once my daughter has got wind of a Prader-Willi meet-up - no matter whether the location is The New Forest, Manchester, London or The Lake District - I have to have a cast iron excuse not to take her. By cast iron, I mean basically a death in the family. Hell, no, immediate family.

So we punched in the postcode in the sat nav, entered into the usual Brexit-complication-level negotiations over song choices on the stereo along the way, arrived, parked up, disembarked, registered, and got our name stickers. (Incidentally, I’m thinking of standing as an independent candidate in the forthcoming General Election on the single issue of it being compulsory for everyone, everywhere, at all times, to wear a name sticker. I’ve essentially got to that age where my brain just has no more face-name neurotransmitters left. I've pondered over the cause of their destruction, and I've narrowed it down to over-consumption of gin).

We spotted a few old friends from previous events, and made a few new ones. There was, as always, a mix of tiny babies (with parents with a tell-tale, slightly shell-shocked demeanour), wobbly toddlers, cute children, my own diminutive teenager, and a lovely 21-year-old chap with a charming heavy facepaint/light beard combo, who introduced himself to everyone at least twice, and was utterly thrilled as this was the first time he’d met more than one person with Prader-Willi ‘like him’.

My girl was adored at by adoring Polly, who has a strong track record of previous adoration. They wandered around hand in hand, stopping off for my daughter to throw a little adoration of her own at Polly’s new baby brother (see picture). And my PWS girl - you know, the one with the insatiable appetite - insisted on not starting her picnic like everyone else until Polly had finished having her face painted and could sit next to her.

My boy behaved impeccably (by his standards), which meant he only burst half a dozen balloons, which wouldn’t have been so bad if they hadn’t sounded for some reason as though they were filled with gunpowder as well as helium. (Actually, in all seriousness, he was remarkable, playing a mini football match with a PWS boy, which awakened in him hitherto dormant traits of patience and magnaminity. Unlike when I play him, and he rugby tackles me, feigns injury, and bursts into tears if he doesn't beat me by ten goals).

It was a sun-kissed day, and a meeting of families who are all on the PWS map. We may camp out most days in very different topographic areas, from the beginners field to the SAGA cruise ship harbour, but today we pitched up together. And it was pitch perfect.

Song is: Yeah Yeah Yeahs - Maps
Posted by Drakeygirl at 21:04 No comments: