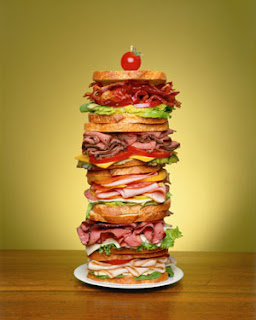 This thing about being a ‘sandwich carer'. It sounds like a euphemism for being fat, you know, along the lines of ‘salad dodger’.

We all know what it means, though, right? Someone of my generation (yeah, yeah, middle-aged, all right, don't rub it in) who is looking after kids and parents at the same time, and ends up being the delicious tikka*/wilted lettuce* [**delete according to mood] in the middle).

But my sandwich is big enough, thank you; two slices of bread is enough. And yet, somehow, some bastarding bastardy how, a third slice has been added. Someone’s Scooby-Snacked my sarnie. They’ve added to the middle.

They gave my husband cancer.

Don’t flip out, he’s not going to peg it.

When we went on holiday at the end of May, I noticed a large, black mole right in the middle of his back. (I saw this when I was rubbing sun cream in, not because we were trying out crazy, holiday cocktail-fuelled sex positions. Look, genuinely we weren't...but crazy, holiday cocktail-fuelled sex positions do sound goooooooood).

He got the mole checked out when we were back. The hospital told him he needed to have it cut out, pretty much immediately, that week.

The tests came back positive for a melanoma. Skin cancer. And there was this little lump under his armpit that needed testing - it could have spread to his lymph nodes.

He had scans. He had more tests. Everything happened fast and yet slow. Each procedure and investigation took a few days to book, a week or so to report back, and another stage to get to and get through.

Gradually, we could let the terrified air out of our lungs as the answers we got were the ones we’d hoped for.

It was Stage 1b, which is early. No, it hadn’t spread.

He’s on his way back from hospital now, having had a second ‘excision’ (to basically dig out everything 2cm around the site of the mole). But it’s OK. They’ve caught it and removed it.

He’s going to have to go back for check-ups every three months for the next few years. I’ll be photographing every inch of his skin to keep an eye on his other moles. Maybe I’ll light some candles, put on some Barry White and tell him it’s sexy nudie pic time.

I love him more.

I didn’t think I could, but I do. (And that’s not just because he’s been signed off from work for a fortnight, which is handy for childcare at the end of the school holidays, honest).

And, don’t take this the wrong way, but I’m really, really hoping he’ll stay the fuck out of my sandwich.

Video is Eels - Cancer For The Cure
Posted by Drakeygirl at 18:24 4 comments: