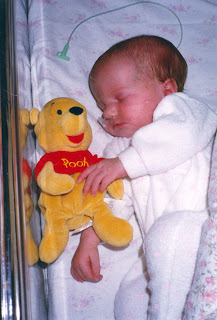 There aren't too many new parents who have to set their alarm clocks to wake up their baby. And it's rare you'll find someone who'll try any trick going to keep the little bugger awake at 2am. But that's what we had to do.


My baby daughter couldn’t cry. Having Prader-Willi Syndrome meant she was hypotonic. Although this sounds like the name of a new sports drink, it just means that she had very weak muscle tone. So she couldn’t cry.

When she could feed by herself, it took ages, I mean AGES, to get just a few millilitres of milk down her, despite trying every special bottle and teat known to man. The effort required caused her to fall asleep, exhausted, before she’d finished.

So every four hours, I’d set the alarm, stagger sleepily into her room, pick her up, switch all the lights on, dance about, take her sleepsuit off and put it back on again, do Scooby-Doo impressions, tickle her, stick on some music, pogo, chat, wave, gurn, bounce, jiggle, jog and do the twist.

All this to wake her, get her feeding, and keep her up long enough to get the sustenance she needed. All this for a child who we would later try to stop eating too much.

Video is The Everly Brothers - Wake Up Little Susie
Posted by Drakeygirl at 07:03