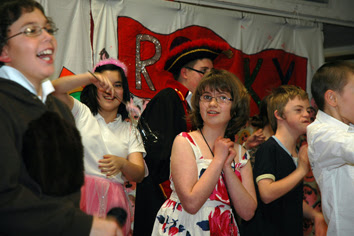 
If I had to pick a phrase to describe the performance, I think ‘joyous mayhem’ would just about sum it up.


The cast was a motley, gorgeous bunch of children, from primary school aged poppets to hulking great teenagers.


They clutched their scripts, lost their place, declaimed their lines to the furniture instead of eachother, got tangled up in microphone wires, forgot their cues, and wandered off and on randomly.


Two of the teachers were on the stage with them, cajoling, reminding, helping, conducting, and just about keeping the lid on things.


My daughter was right in the thick of it. After years at mainstream school of being Angel No. 14, or Camel No. 12, she had a starring role as Cinderella.


The girl that just used to stare at her feet throughout nativity plays was front and centre for the first time.


I wondered whether she’d freeze. Lose her confidence. Clam up.


She didn’t. She looked out shyly from beneath her fringe, pottered about at her own speed, adjusted the microphone each time before she spoke, and read out her lines. With some real oomph.


She was given a bunch of flowers at the end. She clutched them to her chest in the car on the way home, repeating over and over that she wasn’t tired at all.


We bundled her into bed and she was out like a light.


My world is still shining.

Video is Primal Scream - Movin' On Up
Posted by Drakeygirl at 08:20