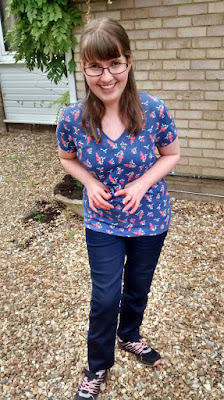 This is the smiling face of my sixth-former after her first day back at school.

It was an unexpected relief after the anxious holiday build-up.

She’d been fretting and worrying about changes. About being in a different year, having a new classroom, a new teacher, new classmates, a new timetable, and new non-uniform rules to contend with.

I’d reassured her by pointing out that everything wasn’t actually completely ‘new', as she’d spent the last half term before the holidays joining the sixth-form special school satellite class for taster days every Friday. (And anyway, half of the class were in her class last year, or go to her Sports Zone club with her, so she knows them well).

I say ‘reassured’, but what I actually did was wade after my daughter as she hopped from one stepping stone of worry to another.

This anxiety-hopping is actually quite a skill; just when you think you’ve steadied one landing spot, she’ll spring onto the next. Only one thing is guaranteed: the line of stones is never straight.

So we had a few slips, wobbles and splashes in the days and nights leading up to the start of term.

But we made it across to the other side. She took the final leap, and...

“We’ve got a sixth form planner, Mum, and we have to write everything in it now because we’re more grown up and independent, Mum, and look, I’ve written in a teacher training day, and the presentation evening, and there’s my name and address in the front and this is a list of what we did today, and parents have to write something in if you need to tell the teacher because this is the way to communicate, and we’re still going to the farm but on a Thursday, and swimming is on a Friday, and we’re going to college on Wednesdays, and there’s a letter for you, and look, I’ve put down what we did today, and look, the teacher said that she was pleased to welcome me to the group and look, she wrote I was a star, Mum, a star.”

Video is Paul Revere & The Raiders - (I'm Not Your) Stepping Stone
Posted by Drakeygirl at 18:26