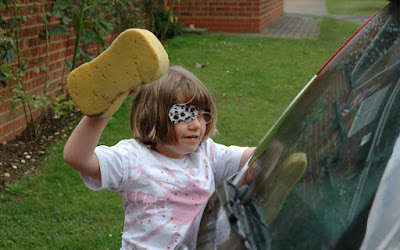 I’m in training. Not for a marathon - I did a half marathon years ago and cemented my belief that there is absolutely no need to run a step further in a world where public transport is available.

No, the regime I’ve adopted is mental, not physical. And my brain-training doesn’t involve forward motion; it’s about deliberately, consciously, taking a step back.

It’s in response to a talk given by my daughter's teacher, Mrs D. My girl, who is now 17, is at a special school satellite class at a mainstream school. She’s adapted well to some of the changes that come with being a sixth-former, after initially finding the timetable tiring.

“We’re usually up on our feet, walking to the town to go shopping, working on the farm, or catching the bus to college or work experience,” Mrs D explained. “And what we’re really working hard on is independence.”

Now, independence is a frightening word. We all know that people with PWS have hugely varying capabilities, but that supervision around food is almost always required. So the idea of independence always comes with alarm bells and caveats and provisos. But Mrs D’s talk got me thinking - hard - about how we as parents can be too protective. She urged us not to do things for our children, but instead to help them gain the skills, where possible, to do things for themselves.

“I know it’s quicker and usually easier and tidier for you to do it,” she said. “But try to think about what they could do that you automatically do for them, unthinkingly, and perhaps unnecessarily. And then - change your habits!”

So I am. I’m trying. (Very trying, according to my husband). I’m involving my daughter more in doing things around the house. I’m involving her more in choosing, buying and preparing food (I know this isn’t an option for many PWS people). I’m even working on a plan which will allow her to walk a short distance to school on her own *breaks out into a sweat, forgets to breathe, sits down until dizziness subsides*. It’s hard to overcome my instincts, they’ve become so entrenched over the years. But I think it’ll be worth it. And if it means we start getting Kevin The Teenager-style “It’s so unfair!” complaints when she moans about having to tidy her bedroom, then so be it.

Actually, her bedroom is way tidier than mine. That’s one part of the independence regime that I’m going to excel at - as soon as Mrs D said: “I know we all like our houses to be perfect and tidy, but you should try to let them help more and let go of perfection,” I had to stifle a guffaw. Me and perfection let go of eachother a very long time ago. If I’m honest, we were never even nodding acquaintances.

So, this is good. Seeing my girl do things for herself that I never imagined she’d be able to is heart-stoppingly, head-swimmingly amazing. It makes me proud in the best sense - not preening, but smiling. A warm-like-a-hug-style pride.


And, as an added bonus, I can pretend that working on improving my daughter’s independence is all about her, when in fact there is one big advantage for me: I now have a great excuse for the state of my house.


Song is The Tears - Imperfection

This post first appeared in the latest edition of PWS News, the newsletter of the Prader-Willi Syndrome Association UK. They have a very informative website here.
Posted by Drakeygirl at 20:06