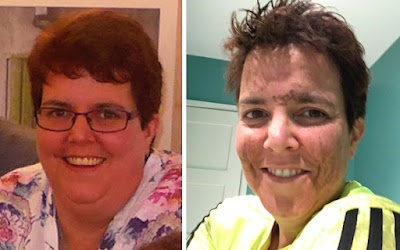 Food is something I have to think about a lot. As mum to a teenager with Prader-Willi Syndrome, I need to be aware of what she’s eating, what portion sizes she’s having, and how to limit the amount of frustration she feels about her restricted diet.
My daughter has no choice. We have no choice. There are valid, consequential, medical reasons for limiting her food intake and keeping her weight under control. More so than the usual arguments against and dangers of obesity. She needs to eat less than anyone else just to maintain a normal weight, and this is despite a broken little part of her genetic make-up meaning she never feels physically full up. We help her with that - we always have, and we always will.

Because of this, it’s a cause of mortal shame to me that I’ve been a porker. As I’ve got older, and lazier I’ve piled on the pounds. I slid, with considerable aid from the universal lubricant called alcohol, into Extremely Bad Habits. After cooking a Weight Watchers meal for us all and buying fruit, veg, and low sugar snacks, I’d load up on unneccessary carbs late at night, absent-mindedly grazing my way through cheese on toast, and knocking back the best part of a bottle of red just because, well, because it was Wednesday, and it hadn’t been a very good Wednesday, all right?

I had an epiphany this time last year. No, it’s not a new liqueur. It was a blinding moment of realisation. I was the fattest I’ve ever been. I weighed as much as a prop forward with a pie problem. I was desperately unhappy with my levels of bulk. I hid from photos. I hated going to buy clothes. I didn’t want to book a check-up with my GP because I thought there was a pretty high likelihood that he’d warn me I was a prime candidate for diabetes. When I laid down in bed at night, I felt tired, unhealthy, and unattractive.

I’ve been all kinds of shapes and sizes over the years and my husband has never once criticised my size or suggested I change anything about myself. (I have a sneaking suspicion this could be because when I put weight on, a lot of it goes on my tits, but anyway, it’s one of his more endearing qualities). He still told me I was beautiful, but I didn’t feel it, and I had serious concerns about his failing eyesight. I thought long and hard about what to do. Not letting him make an appointment at Specsavers wasn’t a proper option.

I needed to lose weight, but I needed to find a good way to do it. Not the same bloody crash diets I’d yo-yoed on before, starting off keen, finishing lacklustre-ly, and ending up bigger than before.

So I hatched a plan. A slow plan. A simple plan. Eat smaller portions, drink less often, and move about more. I know, I know, I should patent this, quick. It’s genius, isn’t it?

I saved my boozing for ‘dos’. Birthdays, parties, ‘event’ gatherings. Netflix nights at home did not count.

I had hearty porridge breakfasts to set me up for the day. I cut right down on bread, loading up ryvitas with tasty toppings at lunchtime. I stopped ‘picking’ at rubbish stuff, reaching for fruit instead of chocolate as snacks. But I didn’t cut it all out and I didn’t count calories. I just paid more attention and no longer ate for the wrong reasons (boredom, stress, you know the score).

The moving bit was gradual. I began by walking. I stopped using the car to go down the shops. I started doing regular five mile yomps with my mate (this is not a sapphic euphemism, a ‘yomp’ is a fast walk, and she has way longer legs than me, so it was fast).

I swam. I bought a waterproof MP3 player and loaded up on podcasts and audiobooks, and I swam and swam and swam. (I do five miles a week. In November, I did a swimathon for PWSA UK, and did 400 lengths in an afternoon, going all pruney-skinned in the process).

I started playing badminton with the old folk down at the leisure centre. Some of said old folk are former county players and make me run around. A lot.

I took up squash. At an early training session, the coach had us doing little sprints up and down the court. I finished last out of the four of us. It nearly killed me. Now it doesn’t. I won a handicap tournament cup. In squash terms, I’m still pretty rubbish, but I’m competitive as f**k, and I will not give up on a point.

I was lighter. I felt better. I decided to try running. The last time I did this to any extent, I was about 30, and I remembered it being hard. But I had the bit between my teeth, so I started slowly, with the Couch To 5k app on my phone. It beeps at you and tells you to walk for five minutes, then run for one. 60 seconds seemed like an effing age. I thought I was going to have a heart attack. Then, after doing only five of the nine weeks, where you gradually increase the running times week by week, I skipped ahead, switched it off, and ran the whole 5k. It was still hard, but I felt like a God. A red-faced, out of breath, wobbly-tummied God.

In September, I joined a ladies’ rugby team. Where I wasn’t the fastest, or the fittest, but by  ‘eck, I always gave it my best. And I coincidentally discovered that leaping about and scrabbling in the mud is really funny.

So as the year comes to an end, I can now run 5k in under 30 minutes, and I’m close to breaking the hour mark for a 10k. I’ve run a couple of ten milers and I’m signed up for a half marathon. I set myself a target of running 100 miles a month, which I’ve just done for the second month in a row.

But my body is not a temple. Or if it is, it’s one which sometimes hosts hedonistic pagan festivals. I’ve been to plenty of parties, and over the festive period in particular have scoffed and chugged my way lots of scram and booze, but I’ve also pulled on my trainers and gone for a morning constitutionals to keep my hand in, or feet in, or whatever.

And I’ve lost 52lbs. Three stone 10lb. Approximately 23% of my bodyweight. That is, in every unit of measurement, a lot. (Oh, and I suppose, if you have basic competence at maths, you can work out what I weighed. I’ll give you a minute to push your jaw back up from the floor).

The man I’ve shared my life with for 27 years has done what he always has done - been there for me. When I say there, it’s not right there, running alongside me, but rather over there, being a sports widower, looking after the kids while I’ve been out jogging round by the wind turbines, or chucking an odd-shaped ball around a floodlit pitch. So although I didn’t do it with him, I couldn’t have done it without him. He’s been rewarded, of course, in my increased levels of er...fruitiness. Although he has lost out in the tits department. (They get smaller first, you know. I swear I lost half a stone off them before any other part of my body changed. Am I oversharing again? I am, aren’t I?).

So, I was scrolling down through my Bookface timeline today - something a lot easier now that my boobs don’t get in the way anymore -  and something struck me. Well, something after my first thought, which was: ‘God, you’ve become of those annoying twats who post all their run times’, which I ignored. No, the thing that I realised for the first time was that now, sometimes I post photos of myself. Which I really didn’t do much of before. Because I used to cringe at my image. And now I don’t. I don’t want to curl up into an embarrassed ball when people tag me in a photo (well, not always, although the recent one of me having a lap dance from a half-naked man in an elf-costume did have me dusting off the cringeometer, but that’s another story).

For so long, I hated seeing myself in a photo and being confronted by the massive, muntering size of this person I didn’t recognise.

Now I see me again.

Photo at the top of the page: The left-hand side image was taken in December last year. The image on the right was taken this month, after rugby training turned into a bit of a mudbath. By the way, I haven't got a broken nose, that's just the mud and the light!