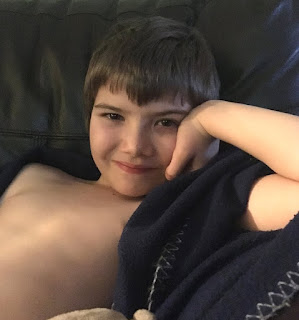 I wish they could meet in the middle.

At one end of the dining table, I’ve got an 18-year-old girl who savours every last morsel of food. The obsessive hunger that comes with Prader-Willi Syndrome means that she eats everything on her plate, down to the very last grain of rice.

At the other end, I’ve got an eight-year-old boy who doesn’t want anything much apart from plain pasta. Any attempts to shovel other valuable nutrients into him require bilateral negotiations that make Brexit look like something I could wrap up easily in an afternoon, and still have time for several cups of tea and a haircut.

Earlier today, I was telling my nephew and his girlfriend about my boy’s culinary stubbornness. At least I was, until the fussy eater butted in with a scene-stealing interjection.

Song is Deerhunter - Back To The Middle
Posted by Drakeygirl at 18:16