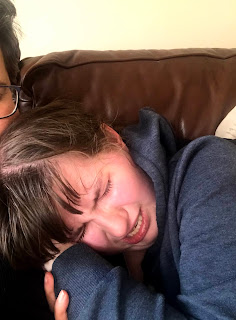 Prader-Willi Syndrome is a train ride. An old-fashioned, steam-billowing, noisy, tooting train ride. Staying on the tracks is tough, cornering can sometimes be tricky, and when you hit hills you have to shovel coal like crazy to get the top, but the trip, the exhilarating trip, is worth it.
Except when you crash.
My daughter’s train has been teetering for some time and this week, it’s gone off the rails. Fittingly, it just so happens to be both Mental Health Awareness Week AND Prader-Willi Syndrome Awareness month, so I’ve got to hand it to her for being totally on-brand. I’ve had phone calls and meetings with the college about my girl’s unusual and uncooperative behaviour. She’s had out of character outbursts, episodes of defiance, tears, and wild-eyed conversations about ideas and mis-conceptions that have been swirling around in her head.
It’s been a throwback to a terrible time, eight years ago, when - out of the blue - my daughter flipped the flipping flip out, smashed stuff, became hallucinatory, and scared the living bejesus out of us, as we thought she might have a brain tumour or some other terrible condition causing her to be almost unrecognisable.
Then, after tests, appointments, and spates of more unusual behaviour, she was diagnosed as having a mood disorder on the spectrum of bi-polar. She was prescribed mood stabilisers, and they worked. They’ve worked ever since. They’ve put a safety lid on the highs, and a cushion under the lows, and we got our daughter back.
Now, however, the lid’s blown off. Whether it’s the cumulative effect of lockdown, with her anxieties building and building and building over the past 14 months, or whether it’s the fact she’s finishing college in just a few short weeks, and the huge life changes that will entail, or whether it’s a chemical thing I don’t know. I just know that it’s hard not feeling able to leave her in her room on her own. I just know it’s tough having to hold her hands for an hour to stop her scratching herself until she bleeds and to prevent her throwing things across the room (the score is 1-1 in the dodging objects Olympics - I ducked under the TV remote, but her headphones got me right on the bonce). I just know it’s impossible trying to reason her when she says people have said things to her that I know they haven’t. I just know it’s upsetting to hear her say she thinks ‘something is inside the floorboards trying to get in’. I just know it’s heartbreaking when she tells me: “My head feels funny and tells me to say things. It keeps making funny noises and it’s going round in circles”.
Pyschosis is the word that is circling in my head. I know full well that people with Prader-Willi Syndrome are more susceptible to psychosis. This could be it. But it also could be the freaky deaky effects of a lack of sleep, as I discovered back in 2013. Let’s face it, we’re all prone to breaks from reality and hearing voices if we’ve been awake night after night - and she has admitted she’s not been sleeping well. So, yes, essentially, I’m telling myself anything I can think of to keep calm, as I stand by the tracks, covered in soot, with the train carriages strewn around me. And yes, I’ve gone back to the train analogy. Give me a break, I’m knackered.
On Monday, when things were at a less serious DEFCON level, I spoke to my daughter’s very kind and understanding consultant psychiatrist (who she’d been discharged from, because she’d been on an even keel for so long). He told me to log everything in a behaviour diary, so we can identify try patterns and triggers, and to contact him if things escalated in the meantime. Well, they’ve escalated. Me and my escalating Excel sheet (already reaching biblical proportions of word count) are getting back in touch.
I hate to post this picture of my girl from yesterday. It seems too raw, too private. But at the same time I can’t sugar coat things. Sometimes people need to see the worst to appreciate the best. She’s smiling, watching The Yorkshire Vet, as I type this. I think she slept better.
She doesn’t look the photo today. She looks like herself.
We’ll get her back to herself.

Song is Get Back by The Beatles
The PWSA UK is a charity which is absolutely vital for people with PWS, their families, carers and professionals who work with them. They are in desperate need of funds - and they are a lifeline. If you can spare just a couple of quid, it would be hugely appreciated. The link to my fundraising page is here: https://www.justgiving.com/fundraising/carolyn-drake5
Posted by Drakeygirl at 14:03