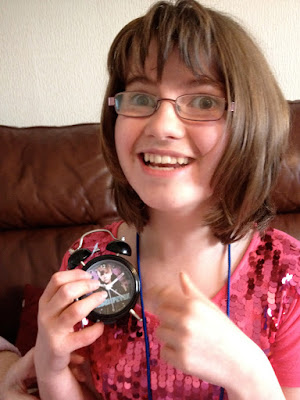 So I take it all back. Everything I’ve ever said about Justin Bieber.


The auto-tuned automaton has an entirely disproportionate ability to annoy me. This, I’m sure, is part of the reason why my daughter had decided to be ‘into’ him.


My only consolation this year has been the fact that the monstrous Mariah Carey has managed to trap the egomaniacal, little, mop-topped marionette in a department store (according to their appalling All I Want For Christmas duet video) and may well by now have smothered him to death with her enormous fake breasts.


But this Christmas, Justin Bieber, in the form of a Bieber Fever Alarm Clock, was able to put this expression on my girl’s face.


For this, he is forgiven.


Oh, and please don’t feel you actually have to watch the video. I don’t want to ruin your Christmas.


Video is Mariah Carey & Justin Bieber - All I Want For Christmas. It's 'Super Festive!' apparently. That is if your idea of something festive is a 41-year-old woman in an Ann Summers' sexy Mrs Santa outfit rubbing herself up and down a wall and presenting her bottom to the camera, like a baboon on heat.