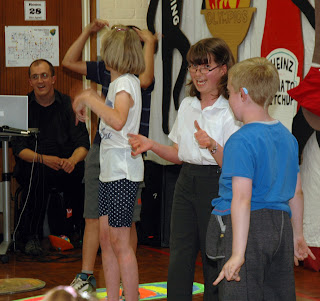 It’s pelting down with rain today, but I’m still basking in the sunshine of Californ-i-A.

I watched my daughter strike surfing poses on a cardboard surfboard this week. I sat there with a big, stupid grin on my face as she and her schoolmates did ‘The Swim’, and yelled out the chorus of The Beach Boy’s Surfin’ USA so loud that thousands of palm trees fell off Hawaiian shirts all over the world. I tried to stop my camera from shaking with laughter as the deputy head appeared clutching a rubber shark and chased them off the stage.

The song was part of her special school’s summer production: “The 12 Days Of Summer” - the much-awaited follow-up to a legendary version of Cinderella that still makes me smile when I think of it, seven months later.

This week’s evening and matinee shows (by volunteering to take photos at one and film the other, I wangled myself two tickets) were cut from the same theatrical cloth, the basic ethos of which is: “Everyone has a go, bung ’em all on stage, and let the organised mayhem ensue”. Somehow, my girl's 'costume' (shorts and T-shirt) were mislaid backstage before the evening show, which - miraculously for someone who struggles when things don't go to plan - didn't seem to bother her. Quite how her teachers had talked her down from this potential catastrophe, I don't know. But they obviously had.

The kids, from little ones clutching teddy bears to big hulking teenagers, and from energetic dancers to those in wheelchairs, were all included - whatever their abilities. They did a performance of Singing In The Rain waving cardboard umbrellas. One young pupil was allowed, upon his enthusiastic insistence, to spontaneously grab the microphone and tell a completely unintelligible story. It was greeted, to his delight, with rapturous applause.

The teachers and teaching assistants were right in the thick of it. One male teacher continued his growing obsession with wearing drag, appearing in both a lollipop lady and a Mary Poppins outfit. A female member of staff, who I had previously thought was quite strait-laced, whirled about the stage in a hippy outfit in a performance that can only be described as astonishing. Another, taking part in a beach scene, was perched on a deck chair with Dame Edna glasses on, reading a book that with a quick zoom of the camera lens was revealed to be Fifty Shades Of Grey.

Thursday evening’s performance came after a two day Ofsted inspection, called with the customary two days notice, during the week before the end of a long, tough term. The head told us the school had received a ‘Good’ rating. I wish the Ofsted inspectors had stayed to watch the show. All they needed to do was watch the pupils’ faces as they interacted with the staff. All they needed to do was to witness the care, attention, patience, encouragement, and love on that stage and in that room. Their highest grades aren’t good enough for this.

Video is The Beach Boys - Surfin' USA. You are just going to have to indulge me. As you can see, they found her fetching pink and yellow outfit in time for Friday's matinee.
Posted by Drakeygirl at 11:01