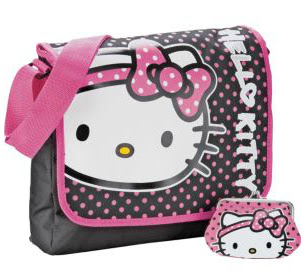 There are some things in life that are high on my list of “Stuff I Must Do More Often.” Standing in a shop trying to keep a lid on my daughter as her mounting panic threatens to spill over into hysteria is not one of them.


The shopping trip started so well. After some heavy Googling she had announced that we could buy her Hello Kitty-branded messenger-style school bag for next term from Argos, just down the road from us. I reserved it online and we headed into the store, while her dad and her brother went to look at the fish in the pet shop next door. I didn’t want him getting overexcited and begging me to buy toys for him. And my little boy’s got quite a bad track record, too (boom tish).

So the system worked. After paying, we collected the bag and I handed it to her in its cellophane wrapper, making the fatal mistake of feeling smug that I’d sorted this out so close to the beginning of the holidays, thus fending off nuclear-grade nagging.

Her face fell. She examined the package closely, and announced it was the wrong colour. My heart sank. I knew this wouldn’t end well.

Her jaw was set. Her heels were cemented in. Her voice was getting louder and louder. Other customers turned round and began giving us looks; one woman in particular began to audibly tut. There’s nothing like strangers judging you to really help calm you down in a situation like this, but I ignored her. My daughter was now in danger of becoming hysterical, and I needed to find a solution.

I managed to keep my voice calm and even.

“Let’s talk to the lady in Customer Service. She can tell us if there are any other colours.”
“There are. I can’t have this pink, I can’t.”

This continued for what felt like hours, but was probably around ten minutes. Three members of staff, the Argos computer ordering system, and their bloody uselessly laid-out catalogue were brought into play. My daughter's voice, which when she gets panicky is like an armour piercing missile for the lugholes, reached hitherto unimagined volume levels. Heads continued to turn, but I resisted the urge to give them all a collective "JUST PISS OFF!". The boys returned from the pet store wide-eyed at the sight of our girl standing in the middle of the shop, about to reach meltdown level.

We finally managed to convince her that there was only one bag, and it only came in one colour. I gave her the choice. To be accurate I had to repeat the choice ten times before it finally registered through the maelstrom of her whirling thoughts. “You know we couldn’t find this bag anywhere else online. It’s either this one or you’ll have to have a completely different one from another shop.”

She agreed. Her lip was quivering, her hair was flopping over her face, where it had come loose from her hair slides, her eyes were wild and teary. But she agreed. We went home, feeling like we'd returned from a battle, not a retail experience.

All is quiet on the Western Front since. I get the feeling I’ve not heard the last of this, and somehow, somewhere along the line, this Company Quartermaster is going to have a mutiny on her hands over the wrong supplies for the troops.