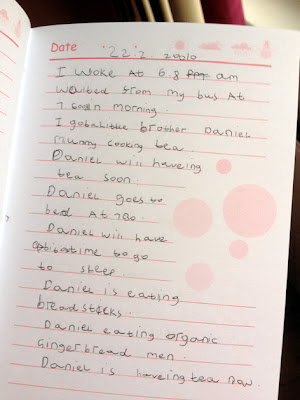 Deciding to have another child wasn’t something we took lightly.

It was five years before my daughter was strong enough for us to consider it. Once we were sure we could cope with the pregnancy lottery again, it took another five years before our numbers came up and we beat the odds.

So she’s got a little brother. A little whirlwind who’s somehow now well on his way to being four years old, although I’m not sure how this has happened so fast.

Having Prader-Willi Syndrome means our daughter’s life revolves around food: she has to be on a strict, low-fat diet, despite being constantly hungry. Not having Prader-Willi Syndrome means our son’s life revolves around Spiderman, saying “poo”, “bum” and “willy” and not having time to be be especially interested in food apart from chocolate and cakes.

So how does our daughter cope?

We wrestled with the idea of not allowing our boy sweet treats, but felt it unfair to penalise him because of a condition his sister has. Our solution, as usual, is a compromise: he has stuff she’s not allowed but usually when she’s at school and he’s already home from nursery. If she is around then the forbidden food will only be dished out to him at snack or meal times when his sister can have her own low-fat or low-sugar alternative, as part of her carefully-timed, carefully-controlled diet. She doesn’t feel like she’s missing out because she’s excited and thrilled by what’s on her own plate.

At the same time, she definitely clocks what he’s got.

For absolute proof of this, you may wish to examine Exhibit A at the top of the page:

Video is The Undertones - More Songs About Chocolate And Girls