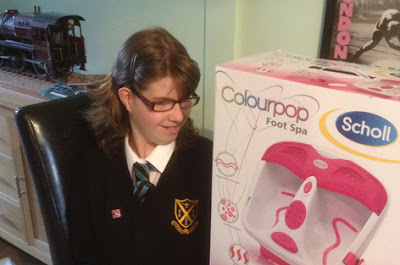 My daughter is 14 years old today. The floppy baby who couldn’t move, or feed, and who we thought might never manage either of these things on her own, is FOURTEEN.

We were numb when our brand-new, little girl was diagnosed with Prader-Willi Syndrome. We thought she’d have an awful life. We thought we’d suffer with her. We wished things could be different. We wished it hadn’t happened to us.

I thought about this last night as I watched her painstakingly typing away on my computer, fervent and wide-eyed, shouting spelling queries over her shoulder at me as she searched the internet for cool stuff to buy with her birthday money (which I pointed out she hadn’t actually received yet).

I could never have imagined her being capable of this. This delicious slice of normality. Admittedly, I didn’t think it quite so appealing when I had to practically drag her off the chair in order to get her to have a shower before bedtime, but let’s skate over that, shall we?

This morning, although her excitement and anticipation levels were sky high, she refused to get up early to open her presents. The sight of a girl who is ravenous for her breakfast waiting in bed until exactly 8am every school day still amazes me. When she was little, she used to pad into our room demanding food at 5.30am: really, painfully, properly, physically hungry.  The hunger is still there, but currently her own self-enforced timetable is unbending. She has got the 8am school day reveille set in her head and somehow, the ‘stubborn’ slider in her brain creeps up to max, just loud enough to muffle the ‘hunger’ track.

At 8am precisely, the family piled into our big double bed, her brother ‘helped’ with the removal of paper, and her presents were unveiled. We had, under strict instructions from our daughter, bought her a foot spa. The road to bubbly foot heaven had been rocky, especially when I realised that the EXACT model that she wanted (because she’d used one like it at Girl’s Club at school) was discontinued. Weeks of repeated explanation, negotiation, and exasperation, had finally seen an accord reached. She would be happy with the squareish pink and white one from Argos as opposed to the previous roundish pink and white model* (*My eyeball is doing a poppy-out thing right now, and I’m clenching my fists tightly enough to crack walnuts, but honestly, I didn’t find this drawn-out, repetitive, painstaking process too stressful...)

So I held my breath as she ripped off the wrapping paper, and examined the long-awaited foot spa closely. "It is the right one,” she agreed, smiling, her clasped hands quivering with excitement. I exhaled, relieved.

I’ve just taken her to school, and handed in Weight Watchers cake slices for her and her classmates to have at the end of the day. We’ll be having her three grandparents round for tea and more presents, later, when candles in a no-sugar fruit cake will be blown out. On Saturday, she’s having friends over for a takeaway curry (low-fat tikka), a film, and a sleepover.

She's such an amazing bundle of contradictions: grown-up in some ways, childlike in others, predictable, unfathomable, strong, vulnerable, amenable, defiant, and wonderful. She's our daughter. Just look how far she’s come.