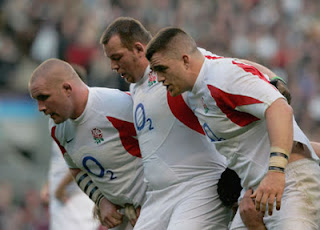 When I say big, I mean chunky, and when I say chunky, I mean fat, and when I say fat, I mean international rugby prop forward levels of heft, which is not particularly acceptable for a woman who isn’t in the front row of anything, let alone the England First XV.

I have a daughter who has a genetic condition that means she never physically feels full up. We have to keep her on a carefully controlled low-fat diet in order for her to maintain a healthy weight.

The irony of me being fat is not lost on me.

I’ve never been skinny. My weight has gone up steadily over the years as my levels of exercise and intake of booze and late night cheese on toast has increased. I lost three stone a few years back when I took up running (or rather lolloping) and trained for a half-marathon. And last year I had a month or two of getting back into good habits, and shed a few blobs of blubber, but ran out of enthusiasm, got lazy again, and piled the weight back on.

There’s no excuse. I cook and eat healthy meals for the family (because my daughter’s Prader-Willi Syndrome has meant I’ve always had to). But working from home has increased my tendency to graze, I eat too many snacks late in the evening, my adoration for beer has become ever more unseemly, and I really have become a stranger to my trainers.

Now I’ve reached tipping point. The point where I’m in danger of tipping over in a faint when I read the dial on the scales and wonder: “Is that why they’re called bathroom scales? Because I seem to weigh the same as a bathroom?”

So I’m doing what I need to do. Eating less. Not drinking alcohol. Moving more. You’d probably recognise me if you bumped into me in the street: I’m the fat bird who has wet hair, goggle indents around her eyes, and an aroma of chlorine. Easy, boys, I'm taken.

It’s working. I’ve shifted a stone in five weeks. The weight loss will get slow and steady now, and after I’ve shed a bit more I’ll supplement my swimming with dry land-based activity - once I've established a rapprochement with my running shoes.

I’m feeling fitter, happier. And don’t worry, I realise that someone else's fitness regime has very limited scope for entertaining blog entries. So I won't mention it again unless it produces an amusing anecdote, such as me being unable to find my sports bra and consequently giving myself two black eyes whilst out jogging.

I just wanted to put down a marker.

Video is The Chemical Brothers - Galvanize