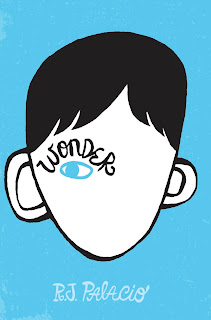 “Then that thing happened that I’ve seen happen a million times before. When I looked up at her, Mrs Garcia’s eyes dropped for a second. It was so fast no-one else would have noticed, since the rest of her face stayed exactly the same. She was smiling a really shiny smile.”

The excerpt above is taken from RJ Palacio’s Wonder - a book about Auggie, a 10 year old boy with massive facial deformities. Specifically, it’s Auggie’s razor-sharp take on ‘the look’ he gets when new people encounter him.

I know exactly what he means. When my daughter was a small, wobbly-legged 3 and a half-year-old, and walking along the street on her pimped up zimmer frame when other kids her age were skipping along, she got that 'look' from people. The split second double take, the intake of breath, the sudden urge to look away, the pity, the guilt, the panic, the smile. It’s not usually cruel or mean - it’s human nature. When we see something out of the ordinary, we instinctively look again, and then look away a little too quickly when we realise what we’re doing. The use of ‘we’ here is deliberate: I admitted in a previous post (Her) that I’d done it myself.

But now that my daughter is older, and no longer wears the rigid, plastic body brace, or needs various contraptions to lean against or strapped on supports to give her extra balance and strength, the looks aren’t as common. Unlike Auggie, she has no obvious, immediate disability. But she does still get them, occasionally. Strangers sneak a sidelong glance when she does something that’s not quite right for her age: when she does an extra lolloping walk; flaps her hands about absent-mindedly; has a ‘tantrum’; or loses control of her emotions inappropriately.

In the book, Auggie is fully aware of his unusualness, his extraordinary medical condition, and how people view him.  I don’t think my girl has quite such an incisive awareness of other’s perceptions. I don’t know for sure, though. I can’t see inside her mind. She doesn’t come with a handy, comprehensive, first person narrative.

Wonder is an affecting story. It’s simply written (it’s a children’s book, although it’s one of those children’s books that adults find just as compelling), and honest. Although Auggie’s condition was hugely different from my daughter’s, it resonated with me because of its focus on the ordinary things in his extraordinary life: friendship, loyalty, school, family, growing up, laughter, and love. There are moments of cruelty and despair. It's got some of the best writing I've seen from the point of view of the sibling of someone with a disability. Above all else, it is full of that most undervalued emotion - kindness.

I’m going to share this book with my daughter and with my son too, when he's older. I think perhaps they can both learn some things from it. That will be a Wonder enough for me.

Video is Natalie Merchant - Wonder
Posted by Drakeygirl at 19:50