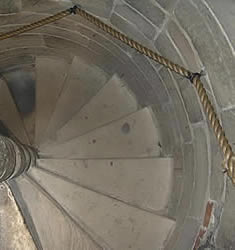 My daughter has pioneered and perfected a new propulsion fuel. It's a little unstable, but supply is effectively limitless, free, and there are no harmful emissions, unless an egg sandwich has been involved at any point.

Being born with Prader-Willi Syndrome means your muscles are weak. Everything physical is harder for you than other people. So from birth, when it came to getting about, my daughter was at a disadvantage.

It wasn’t a level playing field: when other children her age were crawling, she was still so floppy she was unable to sit up. And when she did finally manage it, they’d outstripped her efforts and were already walking. As she got older, she couldn’t tackle the steps leading up to a slide, or walk across that wobby rope bridge in the adventure playground, while her friends clambered like monkeys and raced around. She still needed pushing, when they were pedalling. She often needed rescuing when she became stranded on the top floor of the indoor play area (or the inner sanctum of hell, as I preferred to call it). Now she’s a teenager she can’t break into a sprint on sports day, do a somersault on the trampoline, or bound up the stairs two at a time and leap onto her bed in a strop.

But when I list the things she couldn’t and can’t do alongside her peers, it doesn’t fill me with sad memories.

Because I immediately think of another list. What pops into my head are the alternative milestones she fought to achieve. Like how when she couldn’t crawl or walk, she was still so determined to get around independently that she developed this amazing rolling technique, lying flat on the smooth wooden floors of our house. We called it the Runaway Sausage Roll; she could turn 90 degrees and be out of a doorway in an instant. Then there was the day she completed her debut lap around the park on her oversized trike. And the first time she she painstakingly wheeled herself up the hill to playgroup using her rollator (a kind of zimmer-frame on wheels) - her wobbly-legged, head-held-high gait a strut to behold. Let’s also not forget the astounding slow-motion climb up a mountain at Chamonix.

I’m recalling all this because she gave herself another turbo charge of willpower during a school trip to Warwick Castle, this week, when to the astonishment of everyone (and I’m sure to the brain-popping frustration of the poor buggers stuck behind her) she ascended, slowly but surely, 530 steps to the top of the castle ramparts.

The view must have been spectacular. It’s pretty good from here, too.

You were my heart-flower,
My poetry, my song,
Just one look at you and then I knew,
On that day,
Serendipity smiled down at me.

Video is Asgeir Trausti - On That Day