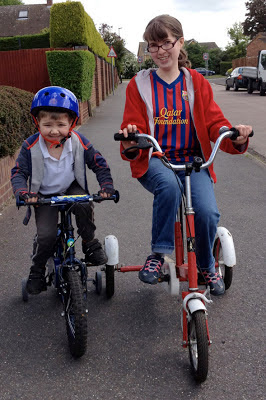 The newest chapter of the Hells Angels took to the streets today.

The Sons & Daughters Of Anarchy (East Bedfordshire Under 15s Division) let loose its two latest 'prospects', on a recce to the rec.

My boy was racing around on his new £10-from-ebay bargain bike (quickly picking up the pedalling technique and balancing required when utilising a tiny pair of stabilisers).

I used the opportunity to mention, casually, to my daughter: "Haven't we still got your trike somewhere?" The battered red three-wheeler had been gathering dust in the shed since our house move, forgotten about and unloved - but the idea of joining her brother on a biker rally had my girl asking me to fetch her Hog from the shed.

We bought it a few years back from the mum of a Prader-Willi Syndrome boy who was selling it because her boy had outgrown it. Ideal for someone with poor muscle control and balance, it gave our daughter the confidence and stabillity she lacked on an ordinary bike.

So out it came. Tyres were pumped, the saddle raised a little, and soon she was steadily and sedately sailing along on the tricycle, serene and happy alongside her fearsome-faced brother who was making machine-gun noises and yelling: "TURBO BOOST!" every five yards.

People with PWS need exercise to help control their weight, as their bodies cannot convert fat to muscle as efficiently as others. But they're stubborn. Really stubborn. So 'forcing' them to exercise is impossible. Sparking their interest, however, varying things up, and making them think the activity is their idea, works a treat.

I reckon the Mini and Micro Hells Angels will be burning a lot of rubber - and calories - this summer, which is fine by me. Just as long as they don't ask me to let them have Death's Head tattoos. 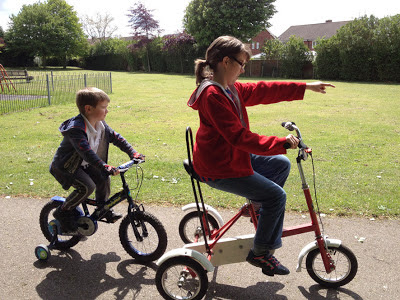 Clip is Steppenwolf - Born To Be Wild, from Easy Rider
Posted by Drakeygirl at 13:49