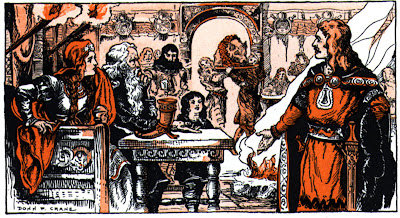 She leaned towards me, an excited look on her face.

“You’ve got to dance, too, Mum. And Daddy. All the parents have to do some medieval dancing with us. My teacher said.”

I laughed, then mustered up my best serious look, and gripped her by the shoulders.

“Listen very carefully to me, sweetheart. You mustn’t say that again before tomorrow. If you want Daddy to come with me to your Medieval Day, then you must not, under any circumstances, tell him that he’s going to have to dance.”

She conjured up a suitably solemn face in response.

“Does it have to be a secret?”

“Yes, yes it does. He will join in, I promise. But he won’t want to come if he thinks there’s going to be audience participation. Not since that show where he had to be the five gold rings in The Twelve Days Of Christmas. Do you remember his grumpy face?”

She nodded. We agreed to keep schtum.
___

Medieval Day proved to be riotous fun. My daughter’s special school satellite class had worked extremely hard to put on an afternoon’s entertainment for parents, with the teacher and one teaching assistant going the extra mile and dressing, respectively, as the lady of the manor and a rotten-toothed peasant.

The kids had been to Asda and bought and prepared food for a banquet. Just as they would have done in medieval times, obviously. As a parent of a child who has Prader-Willi Syndrome and who has to be on a strict diet in spite of never physically feeling full up, the idea of a school banquet should fill me with dread. But it says a lot about my trust in the school that I wasn’t concerned about the temptation of food. I knew the staff would keep my daughter busy with tasks, and watch her closely to make sure she didn’t ‘graze’ as she helped wash the fruit and set the table. Her teacher always liases closely with me over any food-based activities, and there was plenty of healthy stuff for my girl to eat. So she didn’t use the opportunity to gobble down too many chicken legs and throw the bones over her shoulder in a medieval manner. She left that to her father and me.

The afternoon flew by. (Apart from the playing of a medieval tune on recorders - more than two notes, I felt, was unnecessary). We got to look at all the different medieval projects the class had completed this term: they’d created apothecary's unctions and remedies; they'd visited a castle and a birds of prey centre; they’d made medieval ‘board’ games; and they’d built some miniature wattle and daub houses. The day also included a quiz on some of the things they’d learned, and every pupil looked like they were going to burst with excitement has they shoved their hands up in the air, desperate to get their answers in.

And we got to dance. Anyone noticing the expression on my husband’s face when he was told he had to join in could have been forgiven for thinking he'd just received a diagnosis of The Black Death. But he did it. It was a bit of stepping and hopping and twirling, nothing too challenging. We held hands, trod on eachother’s feet, made our kids laugh.

It was a real, proper feast. I’m not just talking about food. We consumed it all, greedily: the laughter, the excitement, the learning, and the love.

Now, where exactly did that chicken leg go?

Video is Chic - Everybody Dance. What? You'd prefer a madrigal?