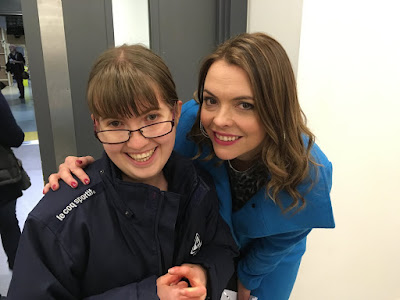 Tracy Barlow - or rather Kate Ford, the actress who plays her in Coronation Street, nodded in reply. “Yes, I am. It’s very nice to meet you.”

My girl nodded back. “Yes. You look like Tracy.” 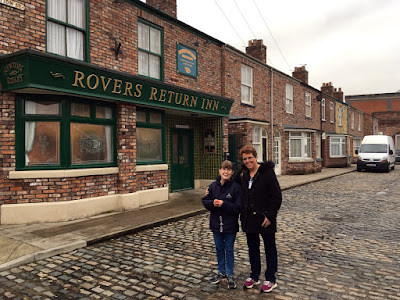 Kate laughed. “I should hope so!” (Although I couldn’t help thinking that Kate did originally take over the part from another teenage actress who went upstairs in a strop and came downstairs as an entirely different person, as people sometimes do in soaps).

Meeting Kate/Tracy was a high point in a day of stratospheric high points, as me and my awestruck girl went on a tour of the Coronation Street studios and set.

It's not normally open to the public, but we had managed to wangle a personal VIP tour (by lucky virtue of a relative being friends with someone who’s connected to The Street and who pulled a few strings, or shook a few cobbles, or whatever the Weatherfield saying is for getting us through a normally firmly-closed door.

We were welcomed by ‘duty officer’ David - who proved himself to be an avuncular, astute, and wickedly funny tour guide. 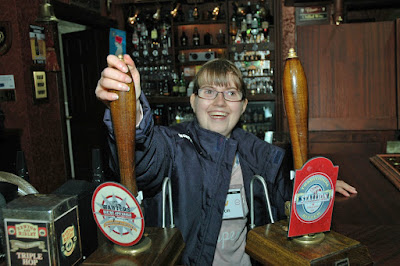 He patiently explained how some of shops and homes were just fronts, with their insides in the indoor studios. (This whole issue properly boggled my daughter’s mind, despite seeing the physical evidence right before her eyes). He took my girl into Underworld, where she pretended to sew a pair of knickers. He watched, amused, as she studied the menu in Prima Doner (checking for spicy options, of course). She was fascinated by the fake food in the counter display fridge at Roy’s Rolls (are you spotting a Prader-Willi Syndrome pattern, here?). He let her ‘pull a pint’ in The Rovers Return. He showed her the ‘lucky’ mascot stuffed toy cat that has nestled in amongst the crisp boxes for years. And he told her of the superstition that actors have not to go through a certain pub door - because legend has it that their Corrie street career will then be over. 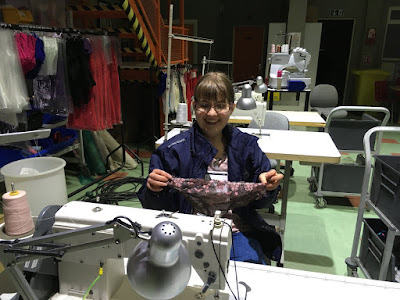 In amongst the perfectly-judged, straightforward explanations to my girl, David shared some more subtle insights with me - leaving me flabbergasted at the care, attention, and astonishing levels of detail in the set design and dressing, where colours, textures, and comic or poignant background details are painstakingly matched not only to the characters, but to the tone of particular scenes and storylines.

At one stage we peeped our heads round a back alley before realising filming was going on further along the street. We had to jump back out of sight, shushing and giggling at the idea of our shocked little faces appearing in the background of a dramatic scene. It would have been the best ever game of televised Where’s Wally, though, wouldn’t it? 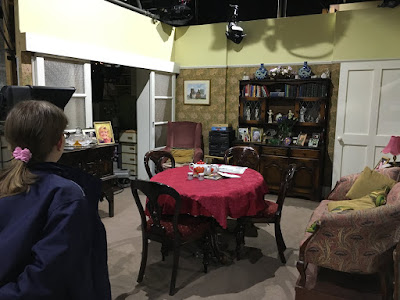 We even got to lurk amongst the crew, watching split screen monitors show an actual studio scene being filmed in front of us. The acting seemed nondescript, flat, and distinctly underwhelming, but when we saw the playback on the screen just seconds later, the drama was transformed, with the close-up camerawork revealed powerful emotions, delicately and skilfully played. It was a revelation. (I’m not sure that my girl appreciated it in quite the same way, but by ’eck, she was mesmerised at seeing something ‘instantly’ transported to the ‘telly’). She assumed it would be on tomorrow night’s edition, so David had a little bit of explaining to do about how this was a scene scheduled for transmission in January next year. I’m not sure she quite got to grips with the time travel aspects of this, and I have a feeling this may be a subject she will wish to discuss with me, ad bleedin’ infinitum. It may ultimately drive me to drink. Newton & Ridley Best Bitter, probably. 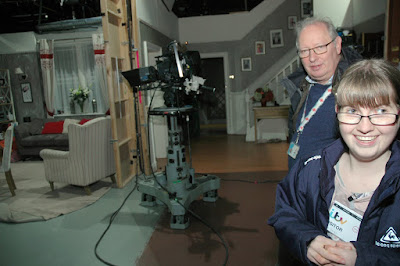 We were there for an hour and a half. My daughter smiled for all of it, and for most of the four hour car journey home, as she clutched her visitor’s badge, and her ‘goodies’ from David: a Newton & Ridley beermat, a Nick’s Bistro serviette, and a Corrie key ring.

“I loved it, Mum,” she said. “I know,” I told her. It was obvious to me and everyone on set who had seen her poodling about today, wringing her hands excitedly. It had been written all over her beaming face.

Song is Skids - TV Stars. All together now, "ALBERT TATLOCK!"