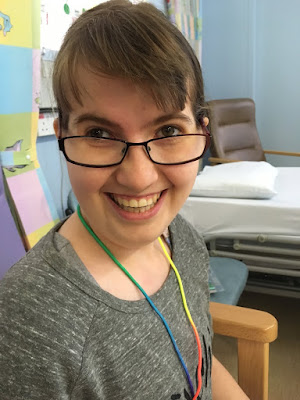 It’s been a year of hospital trudging, and last week we had two appointments in three days. The first was a look-see, x-ray and pre-op assessment in preparation for my daughter having four wisdom teeth out.

She impressed the doctor (or should that be dentist? Well, I’ll go for Hospital Tooth Guy). “What job do wisdom teeth do? If they don’t have a job, what’s the point of them?” my girl asked. “That’s a very good question,” he replied. He was right, it was (if you ignore the slightly fascist undertones). He told her a little story about how our ancestors had bigger jaws, and she nodded along, happily.

Next up was Wednesday’s Glucagon Stimulation Test. It sounds like a noisy Peel sessions band, but it’s not. It was a pituitary gland test to see how much growth hormone my girl produces naturally. The answer to this, I’m sure, is ‘not enough’, as is common with most other people with Prader-Willi Syndrome. She used to have a daily injection but this was stopped a couple of years ago. I still for the life of me can’t remember quite how I went along with this decision at the time without challenging it. I must have been sleepwalking, or drunk, or something. Although my daughter wasn’t growing any taller, due to her spinal fusion, there is a lot of data to suggest that people with PWS benefit  in other ways from continuing to take GH (it slightly increases muscle tone, for example). So I don’t think it was a good idea to stop, and I’m hoping this week’s test will show she needs to start her daily injections again.

The nurse who oversaw the three hour test was an old friend from the endochrine clinic. She immediately fetched a doctor from another ward to put in the cannula on the back of my daughter’s hand. “I’m not letting the doctor on this ward today do it - your veins are so tiny, we need our Top Man,” she whispered. She was right. Top Man hit it first time.

There then followed an injection to deliberately alter blood sugar levels, to stimulate the release of natural growth hormone. And then some blood samples being drawn. And some more. And more. Blood sugar dipping and rising, and all the time - did I mention? - my girl was fasting. Yes, you got it right - no food from midnight. No breakfast, no morning snack, no juice, no nothing. 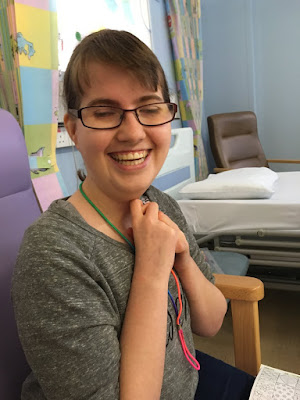 When she was beginning to get super antsy about her lack of food, I pulled out my trump card.

“I’ve got something to tell you. A surprise. Something you’re going to get that you’re not expecting!”

She clutched her hands together and closed her eyes in delight. And then, half an hour later, when the nurse gave her permission to eat, a ham sandwich elicited much the same response.


Song is Sam Dees - Child Of The Streets. Disclaimer: contrary to what he says in the first line, her father is not a 'pusherman'. And I am not a 'solicitor' always on the corner, thank you very much. And that bit about the brother possibly ODing? God, I'm beginning to regret picking this song. It's the 'Street' bit I chose it for, OK? Coronation Street. Blimey, have this instead: