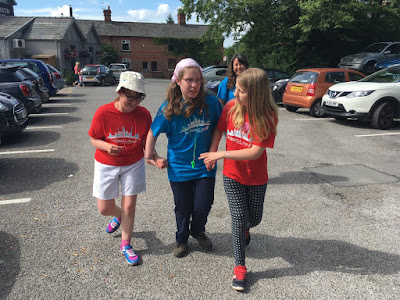 I still remember the first time she walked. The first time I held her hand as she tottered along with jelly legs. My daughter’s floppy muscles meant she was three and a half before this happened. Her rare syndrome means that her muscles will always be weak and she will always tire quickly. But my daughter’s determination means that she’ll damn well always do her best. And today we saw her bright, shining best. Today, she walked six miles. Whatever you do, though, don’t tell her that. 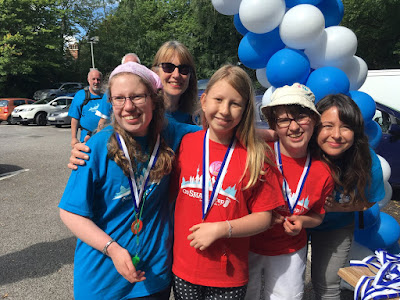 We were up in the Stockport area of Oop North, taking part in The One Small Step charity pub walk. Organised by the incredible family and staff from Almond Family Pubs, the 12.5 mile walk (taking in five hostelries) was in aid of the Foundation for Prader Willi Research UK (FPWR UK). It’s a charity close to their hearts, as family member little Bella has the syndrome.

It took a bit of logistical shenanigans. We were meeting up with two of my girl’s fellow Prader-Willi buddies, who were doing different distances. My girl had agreed to do her absolute maximum of four miles (which she managed once on a walk with school, and which pretty much wiped her out). However, we threw caution to the wind, stretched the truth a little, and decided to do six miles, and tell her it was four. Don’t judge me. 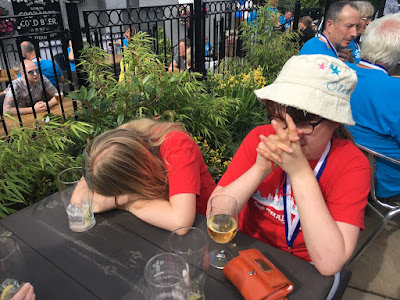 The slightly complicated plan involved meeting Buddy One (whose birthday it was), and Buddy Two at two different pubs, a refuelling meal, wee breaks, and well-timed snack stops. Rain was forecast, but it stayed away, and the sun came out.

And the trio were amazing. With no moaning, stubborn determination, and a chitter load of chat, they walked along roads, through woods, by streams, up a hill or three, down some muddy steps, and over the finish line.  A packed pub garden full of walkers clapped and cheered them over. They clutched their medals with pride. I marvelled at my girl, like I do, a lot, only this was one of those especially marvellous moments.

They were shattered. My girl had a ladybeer (her name for a shandy), and Buddy One had a sleep on the picnic table. They looked like the last two drunks left at the bar on a Saturday night. (A position I would have glad to take on for real, only I was driving).

We disappeared off for Buddy One’s birthday tea. Raised anxiety levels due to their exhaustion led to a small chain reaction of mini meltdowns during the meal-ordering process (including my daughter’s utter incomprehension that we had found an Indian restaurant that DIDN’T do poppadoms). But once grub arrived and was demolished, equilibrium and smiles returned.

I kind of tested the waters about the distance. “I think you might have managed a little bit more than four miles...” I began.

“Yes, I just meant ever so slightly over four. Just like we said. Well done!”

Yes, today a miracle happened. My girl walked six miles. And somehow two of them have disappeared. Keep schtum, OK?

Thank you to everyone who has sponsored us. If you fancy forking out a couple of quid, our Just Giving Page is here.