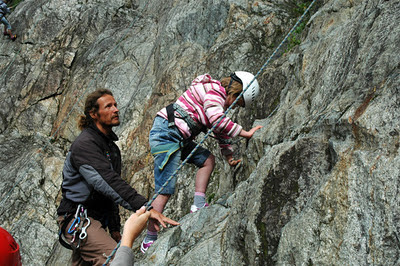 My daughter manages well on the flat.


She’s a bit splay-footed, and has a frankly duck-like gait, and walking tires her out, but on a level surface she ambles along quite happily with others. 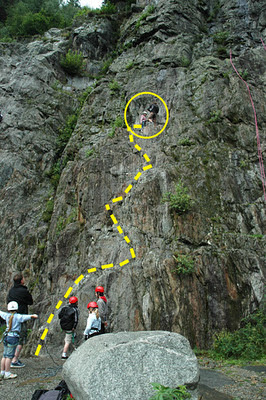 Introduce a slope, or a step, and she slows right down. It’s all I can do to stop my three-year-old boy sprinting up the steps to a slide, while my teenage girl has to tackle them at extremely low speeds and with extreme caution, her hypotonia (poor muscle tone) exerting its insidious influence.

I found these photos the other day. They were taken in Chamonix, France, on a summer holiday we took with friends in 2007.

We spent the morning at a climbing wall. Not a fake one, but a real rock face, on a sunny day, surrounded by stunning mountain scenery.

And the kids were scaling the cliff. The older ones in particular were like mountain goats, grabbing footholds and toeholds and nipping up there like lizard-worshipping Tom Cruise on steroids.

My girl had had a little go the previous year, and only managed to get up as high as we could reach to support her.

She looked at her peers and their older siblings and got this look on her face. It’s the kind of look a sprinter gets in the blocks, or a weightlifter gets as he’s rubbing powder onto his hands.

Then she stepped forward, took the climbing instructor’s hand. (He was a rather fit fellow who had already reduced the adult females in our party to jelly).

And she started to climb. Slowly, painstakingly, she climbed. With a helping hand here and some guidance there, she scaled the rock wall all the way to a ledge about three quarters of the way up - just as far as most of the other kids her age.

And what I remember most was my mate’s little girl (who had been brought up knowing all about my daughter's problems and challenges in life) turning round and shouting excitedly to the rest of the party: “LOOK! LOOK WHERE SHE IS!”

All the kids came running and gazed up at my little girl, awestruck at what they all realised was a superhuman effort.

She grinned back down at them, her chest puffed out with pride, and the instructor beaming beside her.

Mind you, he wouldn’t have been smiling if he had realised how long it would take to get her down.


Song is Mercury Rev - Climbing Rose
Posted by Drakeygirl at 10:15