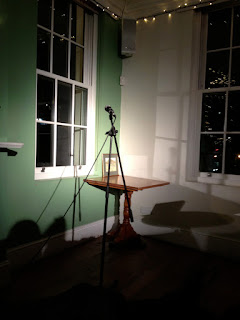 I’ve made it back to dry land.
Last night, I stood up, behind a microphone, in the upstairs room of a pub, in front of a room of strangers (see yesterday’s post: True).
I took a deep breath and I told my ten-minute-long story. Despite my nerves, I told exactly the story I wanted to tell, exactly the way I wanted to tell it.
It was about those traumatic few weeks after my daughter was born. I’ve written about this on the blog (mostly in my first few posts back in June last year).
I chucked in the odd gag, to lighten the mood. A joke about my enormous knockers went down OK. You’re usually guaranteed a giggle from the men if you mention big boobs - apparently it’s the ghost of Benny Hill armed with a psychic tickling stick.
But there was one thing I spoke about for the first time. Something that was very hard to admit. I’ve just got off the phone to my mum, and she asked me what the “big secret” was that I had promised to “reveal”. (I think I got a bit over-dramatic in yesterday’s post).
I couldn’t tell her on the phone. It sounded too cold, too stark.
So, sorry, Mum, as usual, you can find out all the stuff I’m too tongue-tied to say in real life by reading this. I know, I wasn’t too tongue-tied last night, but they were strangers, and the light was dazzling, and I wasn’t actually looking anyone in the eye...
Just as I thought long and hard about sharing my story last night, I’ve thought long and hard about sharing my “script” here on the blog.
And I’m going to do it.
I would apologise for the length, but hell, I had to learn this baby off by heart, so you’re getting the lot! Oh, and Mum? Sorry for swearing.

Thirteen years ago, I was very, very pregnant. (Not just fat like now). I’d been in to see my consultant when I’d gone a week past my due date, and he’d examined me and booked me in to be induced.

This was the cue for friends to give me lots of advice on how to make the baby come naturally. The top three tips were raw pineapple, curry and sex. I wasn’t exactly sure which order to have them in, or, indeed, if I was supposed to combine them.

Nothing worked. (Interestingly, though, I have since adopted "raw pineapple, curry and sex" as a mantra for life, and it's going great).

So we trotted along to hospital on the allotted day, and that was when everything began to go wrong.

The baby was the wrong way up. And it had also decided to, how can I put it, “use the facilities before checking out of the hotel". So I was rushed for an emergency Caesarian.

I’ll say this for the NHS: they give good drugs. The anaesthetist asked me how tall I was as I was about to be taken into surgery, presumably checking dosage levels. "5ft 5in," I told him, starting to feel pleasantly spaced out from the injection. One of the nurses pumped the foot pedal to lower my trolley bed a little. "Hang on!” I said. “I’m only about 5ft now...”

And in I went. Up went a little screen, much rummaging went on behind it, and much grumbling came from the senior consultant. He wasn’t happy. He glared at me and said: “Why didn’t we know this baby was breech? You must have seen your consultant. They really should have picked this up. Who was it?”

I took great delight in telling him. “You.”

The rummaging continued, now accompanied by Olympic levels of harrumphing. And then, suddenly, amazingly, my baby was here. It was a girl. A beautiful girl. My Josie.

At first, we had no idea anything was wrong. Looking back now, I can see in the photos that she was blue around her mouth and her fingers and toes were the same colour. But everything seemed perfect, apart from the fact that she wouldn’t feed. This surprised me, because let me tell you, my tits were frankly enormous. So I had the Good Breastfeeding Cop, Bad Breastfeeding Cop treatment from two nurses. Nothing doing. Good Cop finally took pity on me and sneaked me a bottle of formula milk, but Josie couldn’t even manage that. She didn’t seem to be able to suck.

The paediatrician did his routine checks, lifting up her arms to look at her muscle tone. They flopped back down on the bed with a thump. He walked into the corridor with a colleague, closing the door behind them. I watched through a porthole window. Watched them deep in conversation. And I knew. I knew something was seriously wrong.

Five minutes later she was whisked into special care. Bad Breastfeeding Cop nurse couldn’t look at me. Good. Silly cow. Josie was put in an incubator, and covered with tubes and wires. No-one could tell us what was wrong and we had to wait. For weeks. In a stiflingly hot parallel universe filled with tiny babies struggling for life. And they ran test after test after test.

And then the time came. The invitation to join the people in white coats in that room. You can spot that room easily. It’s as drab and grey as all the other rooms except it has cheerful curtains and a box of man-size tissues on the table. This is a room that positively reeks of sadness and disappointment and lives turned upside down. A bit like Butlins.

The blood tests and investigations had finally produced a result: our daughter had a very rare chromosome disorder. We were given a print-out of a website page, telling us what it meant.

As I read the details, I was physically winded. It felt like someone had punched me in the chest. All the air was knocked out of my lungs.

Its name was Prader-Willi Syndrome (named after the doctors who discovered it). It affects the part of the brain which controls appetite, growth and sexual development. People with PWS are short, have learning disabilities, are socially immature, can’t have children and are unlikely ever to be able to live an independent life.

And although they’re too weak to feed as a baby, children with PWS grow up to have an insatiable appetite, and never physically feel full up. They are always hungry. But, because their bodies can’t convert fat to muscle efficiently, they have to be on a strict diet. For life. If their food intake isn’t controlled, they will suffer from life-threatening obesity. It’s a double whammy. Torture squared.

Oh. And there’s no cure.

Thirteen years on and that time, that bleak, bleak time seems like somebody else’s nightmare.

I wish I'd known then how each milestone reached would bring such elation.

I wish I'd known then that the uncontrollable appetite could usually be managed - to some degree - with lots of planning and distraction. And with the help of her limited understanding of fractions. “Mummy, if I cut this in half, is it twice as much?” “Yes. Yes darling, it is.”

I wish I could have looked five years forward and seen myself gripping my girl’s hand tight when I walked along with her as she skipped through the gates for her first day at school.

I wish I could have seen the look of glee on her face as she belted out a pretty stirring rendition of “Sheena is a Punk Rocker” to her new teaching assistant when she learned her name was...well...Sheena (who I’m not sure was a punk rocker. Except possibly on weekends).

But there’s one other thing I wish. And this is the difficult one.

Before we got my daughter’s diagnosis, in amongst the hundreds of tests was an MRI. And the doctors had showed us an image of Josie’s brain. Showing up in stark contrast to the grey, walnutty swirls were five or six little, white wiggly lines, like tiny worms.

“We don’t know for certain,” they said. “They could be scar tissue. And they could indicate permanent brain damage.”

It turns out, of course, they didn’t mean that at all. They were a red herring. To this day, no-one knows what they are, but they don’t seem to have had any effect on her life. They’re just there.

But we didn’t know that at the time. I looked at that scan, and I thought of my daughter lying motionless on that hospital bed, and I thought she’d be like that for life. Trapped. Unable to breathe, unable to talk, unable to feed herself, unable to move.

It shames me to my bones, but I wished her dead. I wished my beautiful, new, baby girl had never been born.

God I want to go and slap my stupid face. I want to yell at myself: “Don’t you KNOW? Everything is going to be ALL RIGHT!”

Now I know I’m a lucky person. I was lucky enough to meet my husband, the strongest, kindest man I have ever known, when I was too young to actually appreciate that’s just what he was. To be honest, I just thought: nice face, nice arse.

And after some false starts we were lucky enough to make Josie. The ingredients might have been a bit off, but we made her. And do you know what? She’s a happy girl. She leads a good life. She was Cinderella in the special school panto (that was a show and a half). She goes camping with the Guides. She loves Justin Bieber. I’m not going to pretend life hasn’t been tough. (The Bieber love has been particularly hard to stomach). But God, it’s also been FUN. And joyful.

We’ve even been lucky enough to make another one. A boy, who's three now, with no health problems. Who -  if I’m brutally honest - is 10 times the trouble that his sister is. The little bastard.

So now I’ve said my secret out loud, it feels good. Like opening a valve and letting that toxic thought finally escape. I think it’s time. Time to move on.


Video is Piney Gir - Outta Sight (One of the storytellers at True Stories is always a musician who also performs a song, and Piney Gir was last night's troubadour.)
Posted by Drakeygirl at 21:22