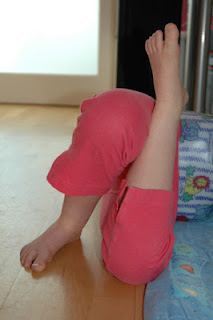 This photo is misleading.


Looking at it, you might think my daughter has grown up to be some kind of limbo champion, contortionist, or Yoga guru.


But her legs aren’t as bendy as they appear here.


As the years have gone on, her splay-footed walk has become more pronounced. The lower part of her right leg and ankle will only turn outwards so far before it reaches its ‘locking’ point.


We were referred to a specialist clinic for gait analysis a few years back. My girl was bedecked with motion sensors and filmed walking up and down before the results were fed into the computer.


Watching the little pair of skeleton legs ambling along, as the software beamed the data on to the monitor, was fascinating, if a little freaky. The disembodied legs (is that right, or should that be disemtorsoed? That’s not even a word, is it?) had a little roll from side to side that was instantly recognisable. “I can tell that’s her walking, just from her skeleton!” I exclaimed, like an idiot. Actually, I said 'skellington', because, well, I just always do.


The upshot of the analysis was that her odd gait wasn’t any risk to her health. It wasn’t putting undue pressure on any of her bones, so it wouldn’t cause her any unnecessary problems. ‘Straightening’ her walk - which would essentially be for cosmetic reasons, for ‘appearance’s sake’ would involve an operation. A huge one. With pins and bolts, and, no thank you very much. We’d been there and done that with her back. For a slightly more important reason. (To correct a curve that if left alone would eventually get so bad that it would be life-threatening, just in case you’re wondering).


The doctors agreed. No op.


A lifelong membership to the Ministry of Very Slightly Silly Walks is fine.


Video is footage shot on my phone of my daughter’s gait analysis.


Video is Chuck Berry - Johnny B Goode. Extraordinary duck-walking just after 2 minutes in.
Posted by Drakeygirl at 08:07