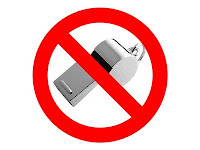 My daughter is now a whistle-free zone.

You may recall that she has had a Roger Whittaker Simulator strung round her neck for years. (See previous post Whistle).

People with Prader-Willi Syndrome can be prone to skin-picking, but in my little girl's case, fiddling with and feeling the string and the metal clasp of the whistle with her fingers seemed to negate the urge to pick.

But her teacher recently suggested to her that she might be able to get on with her schoolwork much faster if she put the whistle away for a while. And because this appealed to my girl's desire to 'keep up' and achieve tasks she's been set, she tried it. A short while later, she decided herself that she didn't need the whistle at break times or lunchtime, either. And now she's ditched the thing at home, too.

I wondered if self-imposed cold turkey might have some side-effects, and it has. The whistle-fiddling has been replaced by a nervous tap, tap tapping of her forefinger on her teeth, followed by three strokes of her finger on her tongue. The number of taps vary, but it's always three touches on the tongue.

Interestingly, she seems to be aware of this new habit, and is trying to talk herself out of it. I mean this literally: she's having regular loud and intense debates, answering back in a two-way conversation with herself, about how she needs to stop the tapping because 'big girls' don't do that.

So I'm waiting to see what'll happen if she does manage to persuade herself to stop.

Because if she does squash the urge, I've got a feeling it'll pop up somewhere else.

Song is Syl Johnson - I Feel An Urge
Posted by Drakeygirl at 08:03