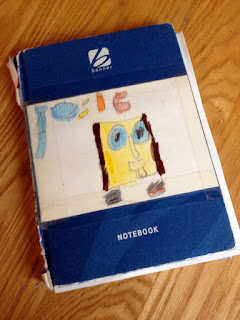 The Spongebob diary is a source of great happiness to me.


It’s a notebook (which my daughter decorated herself with a drawing she did of Spongebob Squarepants). It’s filled in every day by her teachers or teaching assistants, who use it to let me know what she’s been up to, tell me about things she’s enjoyed, things she’s struggled with, and any problems that have arisen. They also use it to inform me of any activities coming up which involve food, so I know what she’ll be having and can adjust her snacks accordingly, or provide a low-fat alternative if needed. I reply, and it works well as a quick, easy channel of communication between us.

But it’s the incidental things I like the best.

Here’s a selection (Nanna and Grandad feature quite heavily):

“We were talking about names today, and she said ‘When Nanny is calm, she calls Grandad Mike, but when she’s angry she calls him Michael and he goes in the garden.’”

“We have had strict orders from her to write in her book that she would love a foot spa for her birthday.”(!)

“We are encouraging her to choose something else other than Hello Kitty, which did not impress her much.”

“She was very talkative today and told us some more amusing stories about Grandad falling asleep and spilling coffee on Nanna’s new carpet.”

“We looked at products that change today, and had a bit of messy time with shaving gel. She told us: “You’ll be in trouble with my mum because she’s just washed my jumper.’”

They’re just little snippets. But what I like about them is that I can hear my daughter’s voice. When her teachers describe her day and how she’s reacted to certain things I recognise her personality and her behaviour. She’s being herself; she’s acting in the same way at school as she does at home. I find this hugely comforting. And I’m confident the staff at her school ‘get’ her. They seem to know what makes her tick, which goes a long way towards making things tick along more smoothly.

It's not all sweetness and light. But there’s a phrase that - thankfully - is common to the vast majority of entries: "She had a good day today". It’s a simple sentence. But it’s a damn fine one.


Song is Etta James - In My Diary