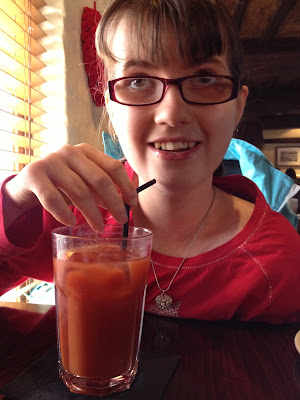 I’ve just treated my daughter to a lunch at a local restaurant. I let her put on her best jewellery and a smidgeon of lip gloss. We had tapas, she drank the spiciest virgin mary I’ve ever tasted, and I gave her my undivided attention, heaping praise on her for her improved behaviour, and emphasising that the outing was a reward for her efforts. The waiter referred to us as 'girls' when we made our order, and my daughter grinned and told me she liked having a ‘girls’ lunch’.  After careful consideration, she told me she’d very much like to do it again, and perhaps take Nanna next time, because she’s a girl, too.

Things have calmed down.

Seven nights of sleep can make a hell of a difference. My suddenly wayward teenager has stepped out from the eye of the storm. The twister is still there in the distance. She’s wandered towards the whirling edge of it a couple of times, but we’ve managed to pull her back.

The wind whipped up on Wednesday and I thought the cyclone cycle was about to blow again. I’m not pretending this is over: there were a few issues again at school, one sparked by an unexpected change that would have caused problems at the most peaceful of times. But staff dealt with it and unlike last week it didn’t escalate to epic proportions.

My girl’s consultant rang and spoke to me twice, at length, to discuss the situation. The blood and urine tests from our hospital checkover on Saturday have come back negative, so it’s not something simple like a urinary infection or a thyroid problem that’s been causing my girl’s sleeplessness. The doctor said she does want to organise an MRI to rule out the intercranial hypertension mentioned at the weekend, which means we could then put our daughter back on her growth hormone injections, which have always seemed to be beneficial.  She said she was going to call my girl’s GP and did so, that day, prompting him to ring us and suggest referring our girl to a local service which helps children with special needs who have behavioural difficulties. This seemed like a good idea. We were happy things were being done.

And on Thursday, my daughter had a great day, dressing in non-uniform and going on a theatre trip with the school to see Goodnight Mr Tom (a trip I thought she wouldn’t be able to take part in if her state of mind and behaviour hadn’t mellowed this week). In the evening, she went to bed and to sleep without any outbursts. My husband and I ensconced ourselves on the sofa, armed with cheap champagne, expensive chocolates, and a DVD of Casablanca, and spent a hour or so at Rick’s Café, a Valentine’s tradition that just a few days ago I thought would be an impossibility.

Like your man Sam on the piano says: “it’s still the same old story, a fight for love and glory”. Well, I’ve got my fight back, I’ve refuelled with some love, and glory bleedin’ be, I’ve had some sleep.

Here’s looking at you, kid.


Video is As Time Goes By from Casablanca