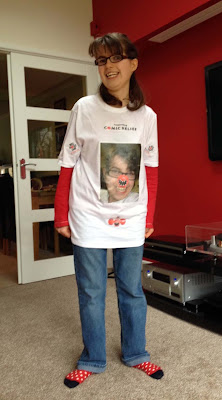 My daughter is wearing a T-shirt bearing a picture of her own grinning face on it. It’s cute, in a slightly disconcerting, Zaphod Beeblebrox kind of way.


It’s her trophy from her school’s Red Nose Day shenanigans. Her classmates each chose their own sponsored activity which they had to do for 30 minutes: one girl did a sponsored silence, another cut out as many pictures of red noses as she could, and my girl ended up choosing to dance for half an hour.

What actually happened was that my daughter’s activity turned into something different. After a restless night the night before, she was a little tired and ended up falling asleep.

“Mum, I won’t get my sponsor money, because I didn’t do my dancing,” she complained, her head face furrowed into a frown, her tummy face still beaming.

I told her we could cross out the ‘Sponsored Dance’ title on her fundraising sheet, and replace it with ‘Sponsored Snoozeathon’ - but she wasn’t having it.

That’s why we’re just about to compile a playlist for our own foot-stomping, toe-tapping, shoe-shimmying, happy hoofing session later.

I steered clear of the telly coverage, as always, as the sight of newscasters doing high kicks in stockings isn’t really for me.* (*Note to Internet Comments Curmudgeons - if you don’t like watching something on the telly, try...er... not watching it.)

Some people say that by raising Comic Relief cash, we are letting the government off the hook and paying for things they should already be providing. This is all well and good, and we could debate this in detail - but while we do that, the money is actually helping needy kids NOW.

Others say that it’s hypocritical and sickening that rich celebs are jetted off to Africa to make documentaries about Comic Relief projects, and how shallow that makes people for having to be ‘inspired’ by celebrities.

But they are completely missing the point: the charity sends the likes of One Direction to Africa because it helps. It means a legion of little girls who worship the gelled-up nincompoops learn about what the charity is doing. Your average One Direction fan is not going to sit and watch a straight documentary on the effect of a water-pump on a poor village community. But they’ll watch Harry, Barry, Larry, Mingo and Mudge’s film about it and the message will get through. This is A Good Thing.

It's also extremely important to remember that while Wand Erection are there they’re not recording any songs. This Is A Very Good Thing Indeed.

Video is Blondie - One Way Or Another (not the Comic Relief version, I'm not that cruel).


Video is The Undertones - Teenage Kicks
Posted by Drakeygirl at 08:49