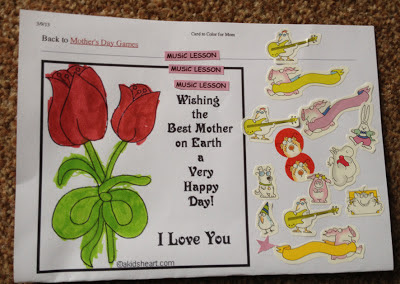 I dropped a few ‘hints’ to my daughter last night about it being Mother’s Day today. These consisted of handing her some paper, a pack of felt tips and saying, clearly and concisely: “If you’re going to make me a Mother’s Day card, you’d better do it now.” 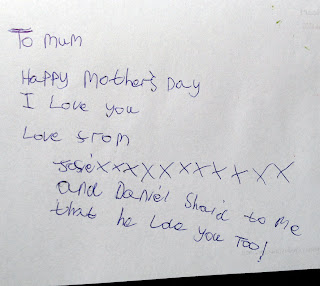 Impressively, she decided to look for a suitable design on the internet that she could print out and colour in. It took her a while to decide. (I know this because of the pile of THIRTY-FIVE discarded sheets of paper printouts of assorted vaguely Mother’s Day-related colouring pictures).

I overheard her trying to persuade her brother to ‘sign’ the finished article yesterday.

I have just been presented with my card, which is a triumph. The stickers featuring streaky bacon cartoon pigs and rock chicks are particularly fetching. The notion of the Best Mother on Earth is also very flattering, if wildly inaccurate. I’m not sure I’m even the Best Mother in My House, and the other one is a fish. The postscript is a very tactful if entirely untruthful summary of the conversation above, which I can’t help but read out in a Sean Connery  accent, thanks to the spelling:

“...and Daniel shaid to me that he loves you too!”

I know a few people who will be struggling with the second option today, whose mums are no longer around to receive a bunch of ropey flowers and a homemade card, and I can only imagine what they feel.

I know how lucky I am.  My mum, the nicest person I will ever know,  is still here. I love her from my head to my heels.

Video is Natalie Merchant - Motherland
Posted by Drakeygirl at 10:47