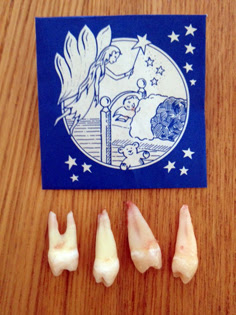 I’ve got a virtual suit of armour. It was forged during the long, wild, terrifying day when surgeons bolted titanium rods into my daughter’s spine. It resides in a box in my brain, where I can rummage around and find it when I am in need of a bit of protection. There are a few other crazy items in the cranium cupboard, including a sink plunger and rubber chicken, but I have no idea where they came from or what I might need them for. But the armour is fished out regularly, and I’m only just packing it away now after its second airing in the space of a week, during which time I became an indentured* knight.  (*Teeth. I’m going to talk about teeth, you see).

My daughter needs to have braces fitted, and this week she’s had two visits to the dentist in preparation, to have two lots of two teeth removed. And I had to sit there about three feet away whilst they stuck an enormous needle in her gums and pulled out a couple of teeth, plonking them in a little tray right next to me, the roots covered in blood. Then watch it all over again seven days later.

It wasn’t actually squeamishness on either mine or my daughter’s part that had me preparing to don my battle armour, though. Her syndrome comes with a high pain threshold, which sometimes is a Good Thing. Needles and blood don’t especially bother either of us. But I was expecting tears, tantrums, and a general mêlée (wasn’t that the name of the car in the Dukes of Hazzard?) - simply because of a number.

Over the last few months, as my girl has struggled to cope with her anxieties and emotions, she’s been turbo perturbed by the idea of having teeth out. Subtraction has been at the root of her root subtraction. She’s been worried by the idea of having less than 28 teeth. She loved having 28 teeth. That specific number. She likes to ask everyone else how many teeth they have, and a common sight if you watch her talking to someone is how quickly into the conversation she will persuade them to stick their fingers into their mouth and dutifully count up their pearly whites.

And yet, a meltdown didn’t happen. I think a slight Eureka! moment a few weeks back when we saw an X-ray of her mouth where her wisdom teeth were visible may have helped. “Look!” I told her, grasping at the opportunity that had suddenly presented itself to me. “See those four ‘secret’ teeth there, that you don’t normally see, well, if you count them that means you WILL still have 28!”

Cometh, the hour, cometh the man, or girl in this case. We went in, the uprooting was done, and we went back in the next week and repeated the removal process. Not one word of protest, not one flinch, not one conversation expressing dissatisfaction or worry about the whole thing.

I shouted out a checklist to her this morning before school.

Well, she had to take them in and show them off, didn’t she?

Talking Heads - Pull Up The Roots