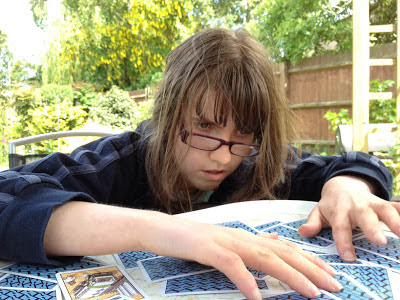 You hear about these metal thieves, nicking road signs, piping, and wiring from remote locations for its scrap value. Well, maybe my daughter has identifed a future career path.

Her brand new brace is no longer intact.

This morning, shortly after writing a blog entry here about her first set of braces, and just under three days after the scaffolding was put up, I noticed something odd about her new tooth furniture.

Half of it was gone.

All of the wire, threaded horizontally across her upper set of teeth, attached and anchored by the small squares of metal glued on to her choppers, had disappeared. A couple of the squares on the back teeth were also missing. The rest remained, like tiny symmetrical islands. The ‘bridges’ between them were AWOL. Absent most bloody definitely Without Leave.

“Where are the bits from your braces? Where’s the wire?” I asked my daughter, the panic rising in my throat. One look at her exhausted face told me I wasn’t going to get any sense out of her. She was at the latter end of one of her sleepless weeks, and basically in a trance. When I asked her if she’d pulled off the wire with her fingers in bed (was that possible?), or yanked it off with a toothbrush in the bathroom), she replied “Yes.” To both questions.

I stripped her bed, got on my hands and knees, scoured her bedroom floor, emptied the bathroom bin, checked the sink, peered down the loo, and searched anywhere I could think the bits of missing metal might be. Because the alternative was dawning on me. There was no blood, which was slightly reassuring, but at moments like these the high pain threshold that comes with Prader-Willi Syndrome was uppermost in my mind. Could she? Might she have? Had she swallowed them?

A couple of hours later, after a visit to A & E, an examination, and an X-Ray, I got my answer: no. The NHS staff were all wonderfully friendly, reassuring, caring and knowledgeable, which made me feel less embarrassed about what was, in the end, a waste of their time. What was always more likely to have happened must have happened: the bits of wire must have been washed down the sink or flushed down the loo.

The photo at the top of the page is my daughter, playing ‘pairs’ in the garden at Nanna’s house this afternoon - a game where she normally lines up the cards in meticulously neat rows. It doesn’t really look like her. This is the mildly catatonic state she ends up in after a batch of sleepless nights; this is where we’re at now.