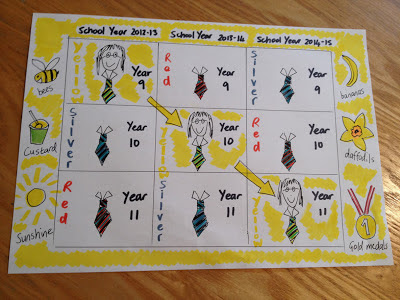 I've been looking up types of waves.

Breaking Waves are formed when the wave collapses on top of itself.
Plunging Breakers reach steeper beaches and curl, moving very fast.
Spilling Breakers disperse their energy over a large area.
Internal Waves are high and become turbulent currents when they hit a land mass.
Tsunamis are caused by earthquakes and are dangerous and devastating.

My daughter occasionally gets swamped by her emotions. We say it’s like a wave hitting her. Sometimes you can yank her out quickly onto dry land, sometimes you have to wait until the tide goes out.

Thanks to my less than exhaustive research on wave vocabulary, I can now describe the tidal phenomenom which affected her today. It was a Refracted Wave. Definition: a wave that travels in shallow water decreasing in power, curving gently. In other words, a littl’un.

It was a tiny pebble that started the ripples. And yes, it was, as it often is, my fault.

Her school tie is blue and black stripes. But Years 9, 10 and 11 actually have slightly different versions: hers, in Year 9, has a thin gold (or what she insists is yellow) outline on the black stripe, but Year 10's has a silver edge and Year 11's is red.  Clear? Are you following this?

I assumed that the colours were permanently allotted to the Years (and suspected it was a moneyspinner, to make you buy a new tie every September). But I was wrong. My girl discovered today that the outline colour stays with you throughout your time at school. So the yellow edged tie will go up to Year 10s next school year, and Year 11 the year after. Are you still following?

Let me put it simply. You only need one tie. You don’t buy a new, slightly-different coloured one each year. Like I’d told her.

So upon discovering this fact at school today my daughter had a tearful half an hour, swamped by refracted waves of emotion. (See what I did there with my new-found wave awareness?)

Her orderly expectations of How Things Are And Will Be had been disturbed. The teachers calmed her down and tried to explain. They even did a picture to try to help her visualise it.

But what it needed was a super-duper chart (see above, preferably whilst wearing sunglasses). We got the felt tips out when she got home. The design was a little ‘busier’ than I’d planned, after we decided to decorate it with yellow things she likes. But I think she’s got it now.


Video is Throwing Muses - Bright Yellow Gun. No big lyrical connection with today's post, apart from the colour reference. But come on, be honest, it's got more get up and go than Coldplay's Yellow, hasn't it?